By Mitchell Boatman
Special for Second Half

The 11-year coach decided before the season that this one would be his last, and his team made the most of it.

The Panthers dominated all day Friday and beat Muskegon Oakridge 1,205-1,072 in the Final to capture the MHSAA Division 3 girls bowling team championship at Northway Lanes in Muskegon.

“I’ve got a really talented team here,” Shunk said. “We had a really good year. It feels good to win another state championship. I’ve got five seniors here, and I’m happy for them.”

“My daughter (Kemmie Shunk) graduates this year,” he said. “She’s going on to play at Alma College, and I just want to be able to travel and go to her events. That’s the reason I’m resigning.”

Leading the way for the Panthers were seniors Shunk and Morgan Johnson and juniors Hallie Weaver and Sarah Gadde. That group helped the team bowl its best game of the year, a 1,004 in the qualifying round.

The Division 3 championship was the second in the last three years for the Panthers. Coming off last weekend's Regional win, Alma posted Friday’s highest qualifying score at 3,273. The Panthers defeated Gladwin in the quarterfinals and came back to down Caro in the semifinals 1,106-1,090.

Oakridge reached the final match for the first time in the school's history and made it there with a sixth-place finish in the qualifying round. The Eagles beat Flat Rock in the quarterfinals and topped reigning champion Birch Run 1,102-1,037 in the semifinals.

The win capped off a great season of hard work, Shunk said.

“This year we did some tougher Division 1 tournaments. I think the tougher competition really helped us out,” he added. The Panthers won several of those tournaments and finished undefeated in their conference as well. The regular-season success had them feeling confident going into the Finals.

“We had a great day at Regionals last week and a great singles event as well,” Shunk said. “Coming into today, we were confident that we had one of the better teams here.”

The Comets captured their school’s second MHSAA boys bowling title with a 1,318-1,146 win over Corunna in the championship round.

Jonesville trailed after the Baker games, but that was nothing new.

“These kids, they’ve fought so hard all year,” Jonesville coach Matt Molinaro said. “They were down in so many matches, and they just fight back and fight back.

“They proved to themselves that they could do that and not give up. I’m proud of them for that.” 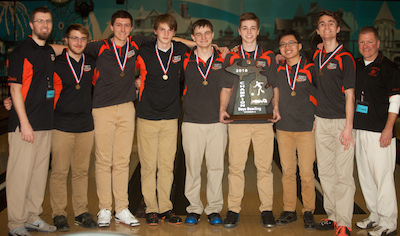 The title, while Jonesville’s second, was the first in Division 3. The Comets won Division 4 in 2014.

Against Corunna, the Comets trailed by just eight pins heading to the regular games. Needing a rally, they turned in their best performance of the day.

But the biggest comeback came in the semifinals. Jonesville trailed Mount Morris by 54 pins following the Baker games but managed to pull out a 1,147-1,111 win.

“That’s all I could reinforce for them,” Molinaro said of his team’s resiliency. “They did this all year. That’s just a few marks; we don’t have to panic. They buckled down and they continue to excel.”

Jonesville finished fourth in the qualifying round with a score of 3,304. The Comets were just six pins shy of second and 18 better than sixth in a crowded field. Jonesville knocked off fifth-seeded Caro in the quarterfinals.

Corunna finished sixth in qualifying. The Cavaliers upset three seed Hopkins and second-seeded Cheboygan. Corunna and Cheboygan were tied heading to the regular games, when the Cavaliers pulled out their dramatic 17-pin victory.

Despite being a senior-heavy team – six of the seven members will be graduating – most of Jonesville’s squad had little varsity experience before this season.

“The majority of them really haven’t had any varsity experience,” Molinaro said. “We’ve had such good teams, they finally busted into the varsity (this year).”

The regular season wasn’t exactly stellar for Jonesville, but one match stood out as a confidence booster.

“We did beat the defending state champions in Vandercook Lake,” Molinaro said. “For that to happen, that gave the guys a little spark.”