JACKSON – The Alma girls and Saginaw Swan Valley boys teams had plenty in common Friday when each won its first MHSAA Division 3 championship in bowling at Airport Lanes.

Each was making its first appearance in an MHSAA Final since 2008, and neither came in as a strong favorite to contend. Swan Valley, in fact, had the lowest Regional score of any team that qualified for the Division 3 boys meet.

Alma, a Regional champion, had to overcome a poor start in its first Baker game (five players from each team bowl two frames apiece in a single game) to edge Hudsonville Unity Christian by 20 pins, 1,282-1,262. Unity Christian won the first Baker game 222-145, and Alma cut the deficit to 43 pins entering the final match – a Peterson match that features a full game by each of the five players.

“We always struggle a little bit in our Bakers, and our strong part is our Peterson games,” Alma coach Ken Shunk said.

Alma and Unity Christian each missed nine non-split spares in the Peterson game. However, Alma struck 28 times to 21 strikes by Unity Christian, and that helped Alma wipe out the 43-pin deficit. The outcome was not decided until the 10th frame, and when anchor bowler Kemmie Shunk stepped on the lane, she needed just a solid count on her first ball to wrap up the championship.

“I was pretty nervous,” said Shunk, who left the 2-8 spare and converted it. “I usually do pretty good under pressure and keep my composure. I just took a deep breath and made a shot, but the pressure was unreal. It was nothing like I’ve ever been under before.”

Shunk, a sophomore who shot in the 230s in the semifinal match, had 198 in the Peterson game as four of the five Alma players topped 190. Senior Susan Schultz led Alma with 209. She threw five strikes in a row from the seventh frame through the first two in the 10th, and that five- bagger proved to be a deciding factor.

Schultz, one of two seniors on the team, had three open frames in her previous four and had a score of 91 through six frames.

“I had to get myself back on track, and we needed it,” she said. “I made an adjustment, moved a couple of boards and got everything lined up right and did what I had to do.

“I was a little nervous because it was really close, but it worked out.”

Freshman Hallie Weaver added 203 in the Peterson game, while Sarah Gadde, another freshman, had 194. Gadde tossed a 234 in the Peterson game in the semifinals as Alma totaled 982 to overcome a 50-pin deficit against Coloma after the two Baker games for a 1,285-1,179 victory.

Gadde offered an explanation as to why Alma performs better in Peterson games than in Baker games.

“It’s more on you, so if you get down, you have to pick it back up, and your teammates help you,” she said.

Morgan Johnson and Aaliyah Wilson shared the other spot in the Peterson game, and Brittney LaCross, the only other senior on the team, took part in the Baker games.

Alma, which qualified fourth, defeated Birch Run 1,144-1,133 in the quarterfinals after trailing by eight after the two Baker games.

“We shot in the 900s all day,” Coach Shunk said. “We just stayed consistent other than struggling in our Baker games. We’ve been working hard all year, and they were able to adjust and do well.”

The Swan Valley boys did not have to use the come-from-behind magic like Alma, but the Vikings still were involved in plenty of drama in the championship match.

Swan Valley defeated Croswell-Lexington by 43 in the quarterfinals, then used a huge 278 Baker game to rout Wyoming Kelloggsville by 107 in the semifinals, setting up a title match against Battle Creek Pennfield.

Swan Valley won the first Baker game by 12 and lost the second by 10, giving the Vikings a slim two-pin lead going into the Peterson game. 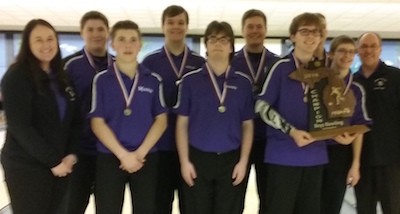 “I just told the boys, ‘Winner take all, just cover our spares. As long as we cover our spares, we can’t lose,’” Swan Valley coach Tony Bremer said. “We covered just a few more pins than they did.”

Swan Valley won the Peterson game 880-820, but Bremer was forced to make a tough decision halfway through the match when he pulled four-year senior Josh Goushaw, who had missed spares in four of the first six frames.

“To pull a senior, that was tough,” Bremer said, “but I did it for the good of the team, and he understood the move.”

Goushaw was all smiles after the match and actually praised Bremer for the move.

“If you’re going bad, you should get pulled,” he said. “I’m perfectly fine getting pulled. I was bowling pretty bad, and it turned out incredible.

Jay Schimmoller, a senior who replaced Goushaw, threw five strikes in a row and then a 9 count to turn a score of 72 through six frames into a 191.

The Vikings were led by their anchor, Mason Eddy, a freshman who averaged 215 this season. Eddy had the lone 200 of the Peterson game – a 212 – to lead Swan Valley.

“After we qualified, there was no oil outside, and the lanes were hooking more, so I just moved right,” Eddy said. “I had the same shot all day, and I really wasn’t nervous. I don’t get nervous.”

“It got harder as it went along,” Conley said. “The more and more we bowled, I got more nervous.

“My thought was to not open and to take advantage of every open the other team makes.”

Swan Valley was just short of making the top eight after the eight Baker games but had Peterson games of 979 and 917 to jump to the No. 2 seed entering match play.

“There were a lot of bumps in the road,” Bremer said. “Our first eight Bakers in qualifying weren’t so good, but we finished the last two 188 and 214.

“I always thought this team was better than the team that made the states in 2008. The way we bowled at Regionals, we barely qualified for third, and we were the lowest qualifying team that made it to states.

“When we got here, Mason Eddy just kept saying, ‘We’re top eight’ all day, and we got in. Then, in our first quarterfinal match we came out with 278-209 in our Bakers, and from there I knew it was ours.”