BATTLE CREEK – The Bronson boys bowling team walked a path to its first MHSAA championship this season that no high school team should ever have to travel.

But the courage shown by the Vikings likely explained a little added loudness to the cheers and a few more of the tears during the final frames of Friday’s Division 4 Team Final at M-66 Bowl.

The Vikings – who along with Vandercook Lake’s girls claimed this season’s championships – made sure the name Tyler Wirtz was included as coach Roger Wisman listed his bowlers during the trophy presentation. Wirtz, a senior, died in a crash Dec. 19.

“We stepped up really big when he was gone. I know it crushed the entire team, but we stayed together,” said Bronson’s Joseph Weigt, the lone senior in the lineup Friday. “This was a good journey and life experience for us. … We stepped up and got the job done.”

Bronson’s boys, who finished only their third season as a high school program, downed St. Charles 1,354-1,283 in the championship match.

Vandercook Lake’s girls, meanwhile, repeated as winners with a 1,052-945 win over Brown City – earning the Jayhawks girls their sixth MHSAA title in the sport.

The Vikings, who entered the postseason top-ranked but finished second at their Regional last week, trailed the No. 2 Bulldogs by 24 pins after the two Baker games. But Bronson started off the regular game portion with 10 straight strikes – two each from every bowler in the lineup – to take away both the lead and momentum.

“The kids come through. Every one of them come through,” Wisman said. “We had a huddle before we started. We tried to be positive. ‘We can do this,’ I said. And they rolled with it.”

Junior Brandon Hyska, last season’s Division 4 singles champion, led the way with a 236 and junior Bryan Foote came in at 235, while junior Kameron Haviland rolled a 213. Weigt, who averaged 161 this season, added a 193 to the effort. Junior Brandon Taylor rounded out the scoring with a 165.

St. Charles was a semifinalist in 2017 but needed to win a roll-off to earn the final quarterfinal spot Friday. Junior Michael Pratt led St. Charles in the regular game with a 255, and senior Alex Dittenber rolled a 200.

It was an impressive run, especially keeping in mind that the Bulldogs posted their second runner-up finish in three years despite graduating three-time singles champion Kyle Tuttle last spring.

Tuttle missed a fourth individual title by falling in a close match to Hyska in last year’s quarterfinals. Hyska went on to dominate the rest of the singles field, but was raring to come back this winter and pick up a team title as well. 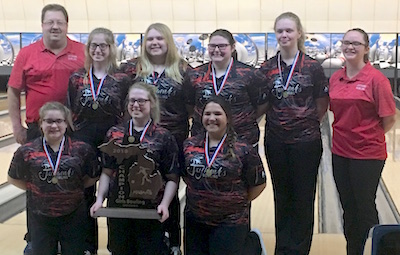 “We knew we were down 20, and we knew we had to make a comeback and we had to do it quick, get ahead and stay ahead,” Hyska said. “It gets kinda contagious. Your teammates start striking, and you want to do it too. We’ve done it multiple times this season when we needed it; (we’re) 18-0, and it showed.”

Vandercook Lake’s girls dominated their qualifying block, finishing first by 118 pins. In the Final, the Jayhawks – ranked No. 10 entering the postseason – led No. 2 Brown City by 60 after the Bakers before adding 47 to the margin during the regular games.

Juniors MacKenzie Johnson and Preslee Stahl led in the regular games with scores of 168 and 166, respectively. Senior Allana Hatfield rolled a 152, freshman Arielle Oakley a 141 and sophomore Evie Hatfield a 113.

The Jayhawks lost three league matches early this season by a combined 30 pins. But coach Todd Reichard said a team bonding dinner six weeks ago charged his lineup, which went on to avenge all three defeats and claim the conference title.

“We had to come a pretty far way,” Johnson said. “In the beginning of the season, you could tell we needed a little work to ever become state champs again. But I think us bonding as a team and coming together more really happened throughout the last part of the season, and that’s what helped us. We had our whole team today as one.”

Vandercook Lake will have three individuals competing in Saturday’s singles competition, and will graduate only one contributor this spring – which no doubt will make the Jayhawks a team to chase again in 2018-19, as few others have been so consistently successful at this level.