JACKSON – Daniel Higgins of Olivet and Kayla Jackson of Flat Rock made their first appearances in the match-play portion of the MHSAA Division 3 singles bowling tournament Saturday at Airport Lanes.

The lack of experience in the MHSAA Tournament – and a subpar start in their qualifying rounds – did not slow them down a bit.

Jackson, a Regional champion, exploded for a 706 series in the final three games of the six-game qualifying block to earn the No. 2 seed for girls. Higgins, meanwhile, had games of 235 and 238 in the fourth and fifth games of qualifying to grab the No. 12 seed in match play.

From there, they rolled to the titles, although there were challenges along the way.

Higgins, a junior, defeated Bailey Neal of Battle Creek Pennfield 404-340 in the two-game championship match. Higgins led by five after the first game but wrapped up the championship with six strikes in a row from the third through eighth frames of the second game.

“I was struggling with my release throughout the day,” said Higgins, a right-hander who averaged 200.7 over 14 games Saturday. “Once I found the release that I was consistent with, I could follow through more consistently.

“I struggle with being consistent with my hand, so it was a struggle to keep it consistent all day.”

The road to the championship wasn’t easy for Higgins as he faced two opponents with a history of success in the MHSAA Tournament.

Higgins opened match play with a 377-363 victory over defending champion Tyler Kolassa, and in the Quarterfinals, Higgins topped Jonesville lefty Jonah Root 395-385. Higgins needed a mark in the 10th frame of the second game to defeat Root, a semifinalist a year ago.

In the Semifinals Saturday, Higgins had back-to-back games of 211 and 226 to defeat Robbie McKinnon of Birch Run 437-396. Neal, who had the second-highest Regional score in Division 3, awaited Higgins in the final.

Neal had a slight lead going into the 10th frame of the first game, but Higgins threw a double and 8-count for a 188-183 victory. Then he used the six-bagger in the second game to breeze to the 64-pin victory.

“Coming in, I just wanted to make the top 16,” Higgins said. “I’ve been in situations before when I get placed into a bracket and come out in the first round or second round and go home, but today was totally different.

“I was able to keep my composure throughout the day and come out with the championship.”

Higgins, who averaged 184 in his high school league, was trying to take it all in after the final match.

“I definitely didn’t think this was going to happen,” he said. “I just took it one shot at a time. I didn’t try to set any goals, I just came in and tried to execute. I’ve been doing well this past month.

“I’m just trying to keep calm, and it’s probably going to hit me sooner or later. Right now, I’m still trying to keep myself from freaking out and destroying the place.”

Jackson, a senior, struggled in her second and third games of qualifying before making a big adjustment.

“I did a ball change because I bowled a 148 my second game and I bowled a 175 in my third,” she said. “I changed my ball and moved to the right and it just happened to work out.”

Saying “it just happened to work out” is an understatement. Jackson finished qualifying with games of 268, 215 and 223 for a 706 series – the first 700 of her life. Jackson, who carried a 182 average this year, averaged a shade below 207 for the six-game qualifying block.

“That gave me a lot of confidence because I knew I found my line on the lanes,” said Jackson, a right-hander who averaged 201.4 for the 14 games Saturday. “As long as something didn’t change dramatically, I knew I was going to be pretty set for the day.

“I kept the same line the rest of the day and just had to make some small adjustments.”

Jackson won her first match 369-347 over Kylie Helms of Ovid-Elsie and ran into Alma freshman Sarah Gadde in the second round. Gadde, a member of the Alma team that won the team championship Friday, opened with a 10-pin victory over Jackson, who rebounded with a 213 in her second game for a 378-350 victory.

Jackson wasn’t seriously challenged in the Semifinals as she used a 240 second game for a 401-319 victory over Mikayla Kewley of Menominee. Jackson kept her momentum into the championship match, and her opponent, Sabrina Ball of Coloma, proved to be a tough opponent.

Ball had an early four-bagger in the first game but had three open frames in the final four as Jackson secured a 205-182 victory. But Ball wasn’t finished as she had five strikes in her first seven frames of the second game to make it a tight match. She ran into a split in the eighth frame and failed to convert, and Jackson took advantage of the opening.

Jackson, who had struck in the ninth, just needed five pins in two shots in the 10th to win the title, and she won it in style with a strike as she finished with 225 and a 430-400 victory.

“It felt good. I was so happy,” Jackson said. “I was nervous. I knew I had to get some strikes in a row, but I was making my spares.” 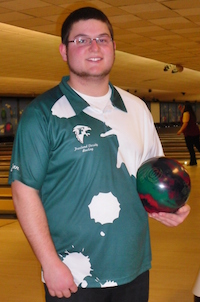 It was the third appearance in the Singles Finals for Jackson, whose previous finish was 18th when she missed the cut by 16 pins a year ago.

Aside from the championships, the big news of the day was a 300 game thrown by Freeland senior Brendan Welsh. It was the eighth 300 game thrown in the MHSAA bowling singles tournament and just the third since 2008.

The perfect game came in Welsh’s sixth and final game of qualifying and helped him earn the No. 1 seed with a 1,302 total. He lost in the Quarterfinals to McKinnon, who finished his second game with five strikes and an 8 count to beat Welsh by three pins, 397-394. Welsh had won the first game 211-171 but went home with the second 300 game of his life.

“At the beginning of the game, I moved a board left because the lanes had dried up a little bit,” he said. “I just hit 10 board all day.

“I was dead flush except for the first one in the 10th frame – it was a stone 7 pin, but a pin came down and hit it off the lane, and I was like, ‘Whew.’ The second one in the 10th was dead flush, and the third one I came in a little bit high and a pin slid across the lane and knocked down the 6-10.”

Welsh, who averaged 215 this season and had his first 300 game in October at Starburst Lanes in Saginaw, said bowling a perfect game in front of a large crowd for the MHSAA Tournament was challenging.

“It was nerve-wracking,” he said. “I was shaking and trying to breathe in and out and stay calm. I just did what I had to do.”