JACKSON — History was made Friday, and it brought Jim Tesner to tears.

Never before in the history of sports at Essexville Garber High School had a team won an MHSAA Finals championship.

That changed when the girls bowling team won three matches, including a whisker-close Finals match against Clare at JAX 60, to put the first Division 3 Finals trophy in the Essexville Garber case.

And that history was not lost on Tesner.

“I keep repeating this: I always want them to only focus on what’s in front of them and not what’s behind them,” he said. “But there are exceptions, like this trophy we’re going to get. That’s behind us, but it matters.”

The Finals win provided a fitting end to the Dukes’ season that included an undefeated Tri-Valley Conference record, a conference tournament victory and a Regional championship.

“I don’t know, I’m at a loss for words,” said an emotional Tesner, who has made a couple different stops during his 30-year coaching career but has been with the Dukes for the past decade. “They bought into the system. Last year we missed going to states by 42 pins. We finished fifth (at the Regional). I just kept hammering that and hammering that. We missed so many spares, and this year we stepped up our spare game.”

Those spares came in handy in the Final. With Clare junior Sydney Swartz shooting 210 and senior Jenna Betts tossing 209 in the team game, the Dukes needed every mark. Tesner said Brittany Rohde’s 175 that included just one open frame was critical.

“I don’t know where she came (from), but she dug down,” Tesner said. 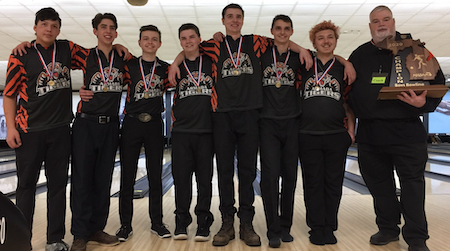 Garber qualified fourth after eight Baker games and two team games and downed Jonesville, 1,173-1,105, in the quarterfinals and then top-seeded Coloma — which shot a 288 Baker game during qualifying — 1,157-1,145 to reach the Final.

For the boys, Armada won its second Finals trophy and first since 2015 by getting out to a huge lead after the Baker games and holding its breath in the team game while Boyne City mounted a comeback.

“It means a lot. It’s awesome to work with people for so long and have something like this happen,” said coach Jim Carl, who started the program in 2003. “It just shows that all of our hard work paid off.”

Armada struggled through qualifying, squeezing in as the eighth seed, then got into a 93-pin crater after the Baker games against top-seeded Cheboygan in the quarterfinals. The Tigers righted the ship just in time to post a 1,039 team game and get past Cheboygan, 1,355-1,304.

They beat Birch Run by 173 pins in the semifinals and darted out to an 82-pin lead on Boyne City after throwing six strikes in each Baker game to go up 394-312.

Boyne City was undaunted during the first portion of the team game, essentially tying things up around the sixth frame, but Dylan Malinowski threw six of seven strikes between the fourth and the 10th frames to create some breathing room.

“It feels really amazing. It’s my first year coming to states, so it’s a really exciting moment for me,” Malinowski said. “I just step up to the line, clear my mind and do my thing.”