MUSKEGON – Emily Feldten clearly remembered the conversation she had with her coach as the Division 3 girls team bowling championships came down to the final three shots.

The Coloma junior had assured coach Carley Burrell she could be counted on to handle the team's anchor position in Friday's Final against second-seeded Birch Run at Northway Lanes.

And she showed it in dramatic fashion, as Coloma edged Birch Run 1,112-1,104. Down 14 pins after the match’s two Baker games, Coloma, helped by two strikes in Feldten's final three shots, finished off a furious rally to win its first MHSAA title since 2010.

Burrell said she quietly pulled Feldten aside before deciding on her Finals lineup to make sure the junior – who has been part of teams ranked No. 1 at the end of the regular season the last three years – was mentally up for the challenge.

It proved to be a monumental decision.

"She knew what we needed," Burrell said. "I talked to her about (the anchor spot), and pressure can be scary. I wanted to know if she could handle it. I knew she was a pressure bowler."

Feldten said the scenario played out so quickly, she didn't have time to think too much about her final chance.

"It's an awesome feeling to get the result the team wanted," she said. "We all worked so hard for this. It's unbelievable for us right now, shocking."

The championship capped a three-year run by virtually the same core of bowlers who have torn up the regular season but failed to get out of the qualifying block of the Division 3 tournament the last two years. Burrell said her bowlers fully recognized this was their last chance.

"They knew this was it, that there weren't going to be any second chances," she said. "This was going to have to be the year it would happen. It came down to a matter of handling obstacles one at a time.

"We knew what the end goal was, and they accomplished it phenomenally. "

Gladwin won the boys title with a 1,229-1,152 win over Ogemaw Heights in a matchup of the tournament's top two seeds after qualifying. 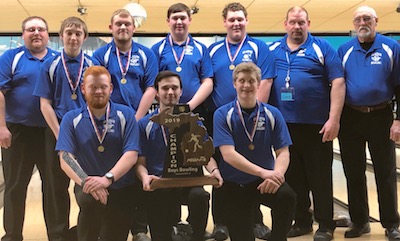 Like Coloma's girls, Gladwin used past stumbles in the tournament as motivation this season. The team featured three seniors and two juniors in the lineup, many who returned from a 2018 Finals where Gladwin failed to make the first cut.

"This is definitely something we sought all year," Gladwin coach Kent Crawford said. "We've been undefeated in our conference (Jake Pine) for the last three years, and winning a state championship is always something we've strived for.

"We've had teams tell us all year we could go far in the tournament, and we've seen that."

Two of the team's four-year seniors, Ryan Day and Cody Roehrs, said two things helped the team finish the run Friday. One was overcoming the frustration of last year's event, and the second was not letting a brutal Michigan winter interfere with their regimen.

"We used (last year) to fuel us and make us do the best we could and win it for the three seniors," Roehrs said. "This is amazing, a crazy dream. We just got together as a team and said winning this is the biggest thing. We're like a family out there."

The team missed as many as 10 practices and a couple of weekend tournaments because of the inclement weather. Such an all-over-the-road schedule could have wrecked the momentum of many teams, but it didn't faze Gladwin, Day said.

"It was tough not practicing sometimes, but we're so passionate about bowling that snow days wouldn't affect us," he said. "Everything we did was to work toward this."

Crawford said it can be argued the lack of practice actually did the team some good.

"We'd have two weeks off from matches at times, but that's true of all teams," he said. "I do think it made us aware of practicing, and that we had to be serious about it."