LANSING – Jeff Wyers is a rare coach who has reached the pinnacle as a coach and player.

Wyers, who was on the Grass Lake baseball team that won the Class D title in 1988, led the Warriors to the Division 4 boys team bowling title Friday.

“These kids don’t just bowl,” he said. “They hang out and have fun as friends. It brings you out as better bowlers and better athletes. We had great unity when I was in high school with the kids I played with. I think it goes a long way.”

Grass Lake won its second MHSAA Finals title by rolling past Farwell in the championship match, 1,257-1,104. The title was the program's first since 2011.

The Eagles got there by beating Rogers City by more than 300 pins in the semifinals, which worried Wyers when the Warriors got off to a slow start in the final.

“We bowled 153-158 in the Baker games, and they weren’t far behind us at that point,” Wyers said. “We average 203 in Baker, so 150-something is way below our par and I thought, wow, they could jump back in at any minute and we could be in trouble.”

But in the regular game, four of the five Grass Lake bowlers bowled 178 or better, while only one Farwell bowler rolled above 166.

Leading the way was Bradley Ramsey, who rolled a 221 the week after being left off the roster for Regional Singles.

“Bradley was lights-out all the way through,” Wyers said. “We have a seven-man team, and when you go to states you can only enter six. For him to step up the way he did was phenomenal.”

Jack Stapleton added a 216 for the Warriors. 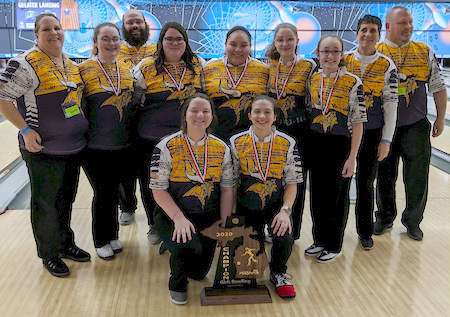 The Division 4 title made up for a disappointing singles showing at the Regional.

“We got two in, but we were shooting for five, so we weren’t enthused,” Wyers said.

Wyers completed his second year coaching the Warriors after taking over just before the 2018-19 season began.

Bronson girls coach Tammy Smith, meanwhile, coached the Vikings to their second consecutive title in her first year running the team. She did also lead them to the championship in 2019 as an assistant, guiding the girls while the boys bowled simultaneously in their Final.

This title was the girls' second in four years as a program.

“The key for this team is they just stay together and everyone keeps each other up,” Smith said. “Everyone plays a part.”

The Bronson boys fell just short in their bid for a three-peat, finishing ninth, 17 pins out of a spot in the bracket.

As a program, girls and boys together, Bronson has won four Finals titles over nine overall seasons; the boys team just completed its fifth.

The Vikings girls prevailed over a Kent City team, 1,095-974, that had four freshmen and a sophomore competing in the championship round.

“I’m just happy we made it through this far,” Smith said. “Hopefully the girls do well (Saturday, at the Singles Finals), and we bring home another title.”

Asked if it might be tougher on the coach than the bowlers in a championship round, Smith laughed.

“Sometimes, yes,” Smith said. “We’re always wishing they do well, knowing we can’t help them out other than being encouraging.”