CANTON — The movie McFarland, USA was based on the real story of a championship cross country program in California, but embellished one important detail.

For the sake of drama, Disney condensed the championship-building process into only one season for the fledgling program. In reality, it took eight years for McFarland to win its first state title.

The story of the Lansing Eastern boys bowling program reads like a work of fiction, but is a true story that doesn't need Hollywood to jazz it up.

In only the second season after their program was restored, the Quakers won the MHSAA Division 2 championship in a showdown with two-time reigning champion Flint Kearsley on Friday at Super Bowl. Eastern had a score of 1,444 to Kearsley's 1,288.

"We were definitely gunning for it this year, for sure, but in the back of our minds we weren't expecting to win it, especially in this kind of fashion," said Dennis Crump, who rolled a team-best 246 for Eastern in the regular game. "It's definitely nice to win it."

It was the first MHSAA championship for Eastern's athletic program since the softball team beat Warren Cousino, 8-0, to capture the 1981 Class A title.

Kearsley's girls were able to successfully three-peat, beating Jackson by a score of 1,249 to 1,111.

Kearsley is a tournament-tested program, but Eastern didn't even have a program for three years from 2011-12 to 2013-14. In their former incarnation, the Quakers never sent a team to the MHSAA Finals, though they did have four individual qualifiers from 2007-11.

Current coach Billy Salazar has no idea why Eastern dropped bowling, but he knew the school needed to put a team back together when he saw the level of talent coming up in the ranks. The Quakers finished fourth in the Regional in their first season back, one spot behind Ionia for the final berth in the MHSAA Finals.

"We had a core of guys who were going into their freshman year," Salazar said. "A mom wanted high school bowling, so I thought it would be kind of a shame to let that kind of talent not have a bowling team. When she asked me to coach, I agreed to coach. We were very close last year to getting through the Regional, and everybody came back."

It was anybody's championship to win following two Baker games, as Eastern held a 452-445 edge over Kearsley.

"That Baker set, we knew we had to keep it close, because we knew they were going to give us a run for our money in the team game," Crump said. "During the team game, a lot of our guys stepped up and we went on a run and just sailed on that momentum."

It was still a close match through six frames of the regular game, with Eastern leading by 22 pins. The Quakers broke it open from there to knock off the Hornets, who beat Eastern by 110 pins to take the Regional championship.

"Our team chemistry was really off," Eastern senior Victor Riojas said of last year's team. "It took a lot of time for us to get the bond we have now."

"We kind of ran into a buzzsaw," Kearsley coach Bart Rutledge said. "We made a few mistakes, and they capitalized on them and built on them. We just weren't able to keep up."

In the girls tournament, Kearsley won its fourth championship in the last five years. Only the boys cross country program, with five, has won more MHSAA titles for Kearsley than the girls bowling team has managed in the 13-year history of its sport’s tournament. 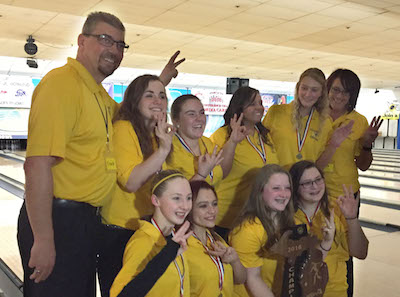 A fifth title could be coming soon for the Hornets, as they were led by freshman Alexis Roof, who rolled a 200. No. 1 bowler Hannah Ploof had an off day, rolling a combined score of 161 with freshman Mary Wheeler, who had a spare after Ploof's strike in the 10th frame. Karlee Griffin was the primary bowler in a score of 164, which she split with Emma Boychuk. Barbara Hawes was the main bowler who split a 158 with Kayla Ward. Alexxa Flood rolled a solo 150.

Roof had five strikes and three spares in the first eight frames before rolling a gutter ball in the ninth. She turned away from the lane, put her head down and laughed. She could afford to when she was bowling so well and her team had built a formidable 416-262 lead after two Baker games.

"I was just kind of like, 'Whatever, I'll come back the next frame,'" Roof said. "I had a good feeling that we had it after those Baker games.

"I was kind of nervous at first, but then I remembered the coach kept saying to act like it's just a practice, it's not that big of a deal. I went out and did what I could; I did my job."

Kearsley coach Robert Ploof knew all about Roof before she got to high school, because he is best friends with her father.

"I was thinking about retiring this year, because my daughter is gone, but I've got to stick around because his daughter is here," Ploof said. "It's just an incredible feeling; winning never gets old."

Hannah Ploof is the only member of the team to compete in the Finals during each of Kearsley's three straight MHSAA championships. Her 238 last year in the Finals carried the team. On Friday, she rolled well below her average of 220.

In the Regional, Kearsley finished second behind only Mason. Mason finished 11th in qualifying, three places below a berth in the Quarterfinals.

"We had a really young team this year, but we did it," Ploof said. "We started out winning the conference. We got to Regionals and had a rough day there. We finished second, but we did it. I'm so proud of them."

Jackson hadn't reached the Final in an MHSAA bracketed sport since the 1980 girls basketball team lost 52-46 to Flint Northern in the Class A championship game. After reaching the Semifinals in 2014 and the Quarterfinals in 2015, the girls bowling team made it to the final by beating Charlotte by a 1,284 to 1,231 margin in the Semifinals.

"They're a great team," Jackson coach David Rodriguez said. "That's why they're three-peat champs. We gave it what we had. I think my girls ran out of gas. It was a great ride this season. I've got four coming back. I see they're only losing two, so we'll do it again next year."