WATERFORD – There couldn’t have been a more appropriate showdown for the Division 2 girls bowling team championship Friday.

Both won their quarterfinals and semifinals to set up a rematch of last year’s Final. But from there, Kearsley went out and took sole possession of the spotlight.

Kearsley won its sixth straight Division 2 title with a 1,352-1,239 win over Tecumseh, although it took a rally late in the regular game.

“I’ve got seven of the best girls I think I’ve ever had,” Kearsley head coach Rob Ploof said. “This is one heck of a team.”

But Kearsley showed its championship mettle, rallying to win the regular game going away, 997-886. 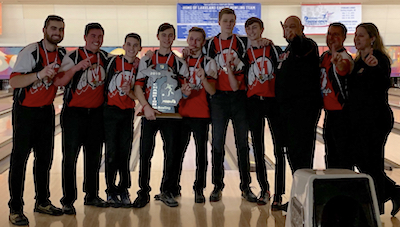 Tecumseh was seeking its first Finals title since it won three straight from 2008-10.

“Rob is an amazing coach, and it seems like when he huddles them up, they come out striking,” Tecumseh head coach Ken Richard said. “We couldn’t hang with them. But they blew us out of the water last year, and we hung with them longer this time. I’m real proud of the girls.”

As for the boys competition, the Final matchup was the opposite scenario featuring two teams that advanced to the championship match for the first time.

“It’s been a special year,” New Boston Huron head coach Larry Collins said. “It’s a team of destiny. They worked hard and probably were the best group of kids I’ve had.”

New Boston Huron was the top seed out of the qualifying block, while Tecumseh was the seventh seed.

Continuing its dominance throughout the day, New Boston Huron took a 436-321 lead after the two Baker games.

Tecumseh made it interesting in the regular game and beat New Boston Huron 1,031-967, but that margin wasn’t enough to overcome the Baker deficit.

Tecumseh junior bowler Hunter Rapaich, the second bowler in the lineup, rolled a 300 during the regular game.