ALLEN PARK – Emma Siekierski kept doing just enough to advance at Saturday’s Division 1 Singles Finals, until she put up a 279 game to move to the championship by eliminating Bailey Tomlin of New Baltimore Anchor Bay.

The Davison senior then prevailed in the final, winning 430-374 over Alyssa Fortney of Zeeland.

“I wanted a state team title badly,’’ said Siekierski, whose team finished runner-up the day before. “We struggled Friday. In our gym we have so many team title banners, but now at least I get to go into the gym and see my name for the individual singles title. It’s something I’ll always cherish. I trusted my shot today.’’

In the boys, division Livonia Franklin made it a sweep in the team and individual titles as junior Ian Wright edged Jared Musser of Davison, 400-391, in the championship match.

“I really didn’t think I’d get here,’’ said Wright. “The goal was the team title. We waited a long time for that.’’

“I struggled in the main,’’ added Wright of the multiple competition areas at Allen Park’s Thunderbowl Lanes. “We got to the arena, and I was able to make some adjustments.’’

Holt senior David Schaberg was the top male qualifier at 1,439 followed by Warren Woods Tower’s Zach McMichael (1,416) and Caledonia’s Alec Bisterfeldt (1,365). The Ians from team champion Livonia Franklin – Cain and Wright – made the top six, while Davison also had two in the final 16: Jared Musser and Shane Gagnon. Caledonia’s Ayden Sulzener also made the top 16 at 1,288.

Cain came out firing in the quarterfinal with a 300 game to dispose of Dylan Jablonski of Canton 485-304. He eventually cooled off and lost to Musser, who had ACL surgery in his right leg two years ago, 451-357, in the quarterfinal. Musser is a one-step, two-handed bowler. 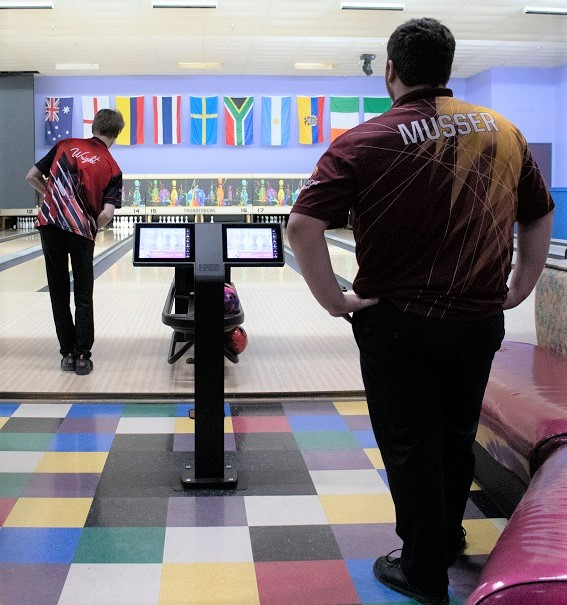 Schaberg advanced by beating Matthew Starbenz of Brownstown Woodhaven, 420-390. His next opponent was Carson Hommes of Grand Rapids Forest Hills Northern, who had beaten Shane Gibson of Waterford Kettering, 378-311. Schaberg eliminated Hommes, 408-395, to advance to the semifinal against Musser, who prevailed 458-388.

Macomb Area Conference stars Carter Milasinovich of Utica Eisenhower and Connor Rogus of Dakota had to face each other in quarterfinal matchup after Milasinovich beat Tony DeLuccia of Rockford and Rogus downed McMichael, 467-387. Milasinovich won the friendly rivalry, 409-405, but eventually lost to Wright, 419-376 while Musser eliminated top seed Schaberg, 458-388.

Tafanelli served notice she would be a force to be reckoned with, beating sophomore Samantha Mason, 545-348 with games of 268 and 277.

She faced Ava Crumley, who had defeated New Baltimore Anchor Bay’s Melanie Struab by one pin, 398-397 in the Round of 16.

Zeeland teammates Smith and Fortney faced each other in the quarterfinals after downing Calie Mitchell of Hartland and Hudsonville’s Morgan Blouw, respectively.

Nataleigh Eagle of Monroe beat Angelita Mireles of Holt, 332-320. She then squared off against Tomlin, who had finished off Pompey-Oshinski, 397-311.

The other quarterfinal had Maliszewski, who had defeated Aubree Clark of Utica (408-378), taking on Siekierski, who had eliminated Karley Chouinard of Westland John Glenn, 361-322.