However, Brandt did not come up short in terms of a championship.

Brandt opened the final game with the first seven strikes before a 7-pin stopped him in the eighth frame. He went on to a 268 game to lead Fremont past Pinconning 1,296-1,203 for Fremont’s second MHSAA title in three years.

“It felt great – although the smash seven wasn’t a great feeling, but it happens,” Brandt said. “I got a little light with the ball.”

Brandt, a right-hander who was using a Storm IQ Tour Fusion ball he had just bought Thursday, is the younger brother of Zach Brandt, who was the Division 3 individual runner-up for Fremont in 2010 and the MHSAA champion in 2011.

“I feel the pressure having to win state because I’ve been bowling with him and all of his friends all my life, basically,” Sam Brandt said.

Fremont nearly did not get out of the qualifying round. The Packers were 11th entering the final game of qualifying and used a 913 team game to climb to eighth and grab the final spot in the Quarterfinals by just five pins over Ishpeming.

“At first, we were half and half on whether we were going to make it or not, but once we found out we made it, we knew we had to finish,” said Fremont senior Jeremy Pikaard, who bowled in the MHSAA Final two years ago for Fremont with Brandt and Mike Margol.

Fremont stumbled early in the first Baker game against Pinconning with three open frames to start. But the Pioneers followed with six strikes in a row for a 225 and went on to a 93-pin victory.

“All year long we’ve been a very resilient team,” second-year Fremont coach Tom Elmer said. “We kind of start slow sometimes, but we battle and battle and battle. We have a strong group of kids.”

In the final game when all five individuals bowl an entire game, Brandt led the way with a 268 while Pikaard added a 231 and Margol had a 203. All three will be joined by teammate Sean Vincent in the Individual Final today, also at Airport Lanes in Jackson. Brandt lost in the Semifinals a year ago. 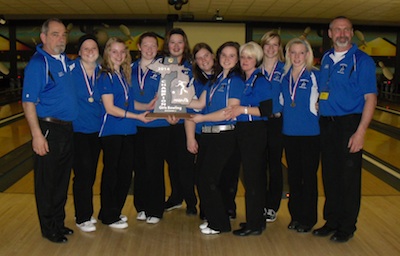 As far as the Pioneers were concerned, beating Richmond was almost as thrilling as winning the championship. Richmond and Croswell-Lexington both compete in the Blue Water Area Conference, and Richmond finished first and the Pioneers third in the same Regional last week.

“It was amazing that we beat them,” senior Victoria Bender said. “It’s one of the first times we’ve ever beat them, and we’ve never beat them by that margin.”

“I felt more pressure against Richmond than anything because they’re like our family,” she said. “But when it came to being against them – we don’t normally beat them like that – we came in feeling good and pulled it off and got first.”

“We were very nervous going into it, but the girls came to bowl,” Croswell-Lexington coach Anita Mifsud said. “They did a good job.

“There was nice consistency all the way through, and they all stepped up to the plate this year. It was wonderful.”

The Pioneers qualified fourth and beat Wyoming Kelloggsville 1,221-1,149 in the Quarterfinal to set up the match with Richmond, which had a 3,473 qualifying total – 362 pins ahead of No. 2 seed Battle Creek Pennfield, the defending MHSAA champion.

Bender, Geiser, Mosher and LaPorte all will compete today in the Individual Finals. Bender, Geiser and Mosher all are seniors, while LaPorte is a junior.

“It’s pretty amazing that we actually did it,” Bender said. “It took a lot to get here and to overcome the nerves that we had early in the day.”