ALLEN PARK – The bowling season that almost wasn’t saw a first-time champion and a 2020 runner-up take the next step Friday at the Division 1 Team Finals at Thunderbowl Lanes.

Hudsonville’s girls earned their first Finals title in this sport by defeating Belleville in their championship match, while the Salem boys clinched their third team title against Macomb Dakota after finishing runner-up to Utica Eisenhower a year ago.

Salem’s boys led 347-315 after the Baker round, and the Cougars would need a big game in singles to wrestle away the lead.

Hudsonville’s girls had fallen behind 301-297 going into singles play, but their ability to make shots proved to be the difference as it captured the school’s first bowling title. Belleville had eight straight opens during singles play and couldn’t stay in contention. 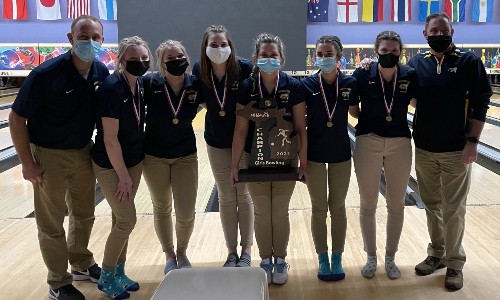 McKenna Hendrickson, the only senior in the Hudsonville lineup, was in tears after her team came through with the 1,149 to 1,122 win.

“This was my last game, and I wasn’t worried,’’ said Hendrickson. “The girls knew what to do. I’ve lost so much this year because of the COVID. I didn’t even have a prom. This is such a great way to go out. It means so much.’’

Brownstown Woodhaven dominated the boys qualifying round with a score of 3,530 to finish first ahead of Waterford Kettering’s 3,399, which was just three pins better than Salem’s 3,396.

Woodhaven’s run was short-lived. Belleville, the eighth seed, jumped out to an early lead in the Baker format, and the Tigers were great in singles, eliminating the top seed, 1,312 to 1,151.

Dakota had used a 1,030 in the last game of team qualifying to jump into fourth place as three Macomb Area Conference schools – Dakota, St. Clair Shores Lakeview and Utica Ford – made the top eight. Belleville squeaked into eighth with 3,228, 19 pins better than Holt.

Dakota sophomore Dylan Maurer shot 276 in the semifinals to lead the Cougars to a 1,499-1,398 victory over Belleville. Salem advanced to the final with a 1,306-1,277 victory over Kettering.

In the girls division, Westland John Glenn was the high qualifier at 3,316 to outdistance Davison at 3,243.

Glenn avoided any possible upset in the first round by extending its Baker lead in singles play, taking out eighth seed Salem, 1,320-1,032. Belleville advanced to the semifinals with a convincing victory over Zeeland, 1,204-1,153. Davison, a perennial threat, eliminated Holt, 1,290-1,111, to advance to the semifinal against Hudsonville, which pounded Midland 1,189-1,101.

The westside school prevailed in the semis, dousing second-seed Davison 1,335-1,250 as Hendrickson led the winners with a 248 score.