The Flint Kearsley senior just has to go to practice.

“We’re each other’s biggest competition, for sure,” Timm said. “You always want to beat whoever you’re with, and it’s made us want to work harder when we have that friendly competition. Our challenge matches are pretty much formatted like state was, so getting that competitive atmosphere outside of tournaments is a good way to prepare you for those competitions.”

Timm is one of four returning individual Finals qualifiers for the Hornets this season, joining classmates Allison Eible, Allison Robbins and Emilea Sturk. They form the core of a Kearsley team looking to get back to the top of the division after having its six-year run of Finals team titles snapped a year ago.

Having to be at their best just to maintain their desired spot in the lineup is a good way to prepare.

A year ago, Timm and Eible advanced to the match-play portion of the Finals, with Timm going on to win after earning the 15th of 16 qualifying spots. She became the third individual champion in the program’s history, finishing off on a high note what had been a disappointing weekend for Kearsley.

The day prior, Kearsley lost in the semifinals of the Team Finals against eventual champion Mason. While a run to the state Final Four may count as an accomplishment for most programs, the Kearsley girls were devastated, as they had won the previous six titles, and seven of the last eight. It was also the final match for coach Rob Ploof, who was retiring after leading the program to all of those titles. 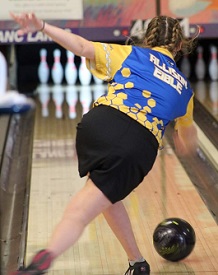 “It was an exhausting day,” Sturk said. “There was just a lot going on. When we started to lose, I think we just kind of felt like we had already lost it. We just couldn’t get back. It was weird, because we always come back. There was a lot of pressure, especially with it being (Ploof’s) last year. We wanted to win so bad for him, and we wanted to keep the streak alive, of course. The pressure just really got us.”

Coach Kevin Shute, who previously coached at Dryden and was the JV coach at Kearsley a year ago, made sure to talk through that Finals disappointment with the team.

“They tried too hard,” he said. “They tried a little too hard there. They were reflecting back and looking at it, telling me all of the things they would have done differently. I think those four girls for sure are definitely hungry.”

The disappointment quickly turned to motivation.

“I think after last season, we were really disappointed with our finish,” Eible said. “And seeing we are seniors, we are more determined than ever to finish our last season out on top and add to our accomplishments. We have all worked so hard to be where we are today, and I’m so proud to call these girls not only my teammates but my family.”

The Hornets had an early test of not only their ability, but their resolve, as they opened their season this past Saturday against Swartz Creek. After falling behind 12-7, they rallied for a 17-13 victory, extending their regular-season match win streak to 132.

Maintaining a decade-long streak could add more pressure, but it’s something the Hornets have become used to carrying.

“Sometimes, but to be honest, I don’t ever really feel (the pressure),” Sturk said. “I’m just focused on bowling and focused on uplifting my team if we’re doing bad. I try to keep my attitude up and keep everybody’s attitude up. We go into a match never expecting to lose. We try to go into a match with as much confidence as possible, because we can’t -- basically we can’t lose because of the streak. It feels like, if we lose, that would be the weirdest feeling.”

Joining the core four seniors on varsity this season are fellow senior Rhyan Langdon-Yaklin, junior Lydia Boggs and sophomore Sara Ritchie. There’s also a strong contingent of bowlers just outside the top seven who continue to push for their own opportunities.

“Our seventh and eighth bowlers could probably start on any varsity team,” Shute said. “It’s always nice to have depth, especially since this year we’re going to lose five seniors, and next year is going to look a lot different.”

While it may look different, the goal for the Hornets is that it will look familiar for the program, in that they’ll be pursuing a repeat Finals championship.

“Winning a state title is just a feeling like no other,” Timm said. “The girls I looked up to when I was younger started a legacy, and I’d really like to leave another legacy.”