CANTON – It’s hard to create rivalries in bowling with how fickle the sport can be and how different teams win so often. But the Flint Kearsley and Mason girls programs have appeared to start a nice rivalry in Division 2.

Two years ago in the semifinals, Mason ended Kearsley’s six-year run as state champion en route to winning it all.

Last year, Kearsley avenged that loss, beating Mason in the championship match to reclaim the throne.

The team portion of the 2022 MHSAA Division 2 Finals turned out to be a three-peat, with Kearsley and Mason once again squaring off in the championship match.

This one ended up going to Kearsley, which rallied from a 25-pin deficit after the two Baker games to earn a 1,178-1,143 victory over the Bulldogs and claim its seventh Division 2 Finals title in eight years.

“I do know the long history between Mason and Kearsley,” said Hornets first-year head coach Kailee Tubbs as she and her team wiped away tears of joy during the celebration. “I think it’s one of those things where we really look forward every year to facing them.”

Kearsley beat Mason 850-790 in the regular game to prevail, with Lydia Boggs setting the pace with a 191. The Hornets finished first in the qualifying block and stayed hot through the final to earn a wire-to-wire victory.

“I just wanted them to stay loose,” Tubbs said. “The biggest thing was having them relax.”

Mason head coach Russ Whipple said it’s been a lot of fun establishing a rivalry with a program like Kearsley, but that it just wasn’t meant to be for his team in the regular game. 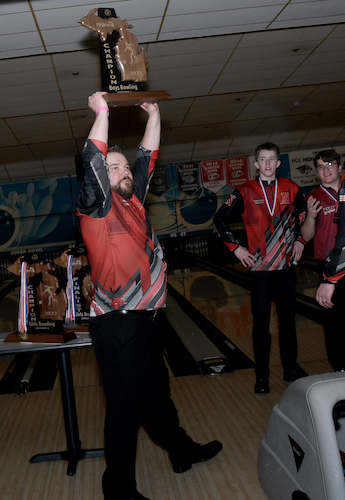 “We were right there at the end and didn’t have a couple of things fall our way,” Whipple said. “I don’t think either team scored exceptionally well that last game. It was just one of those things, and it’s how it goes.”

In the boys competition, Grand Rapids Northview won its first Finals title in what also was a wire-to-wire victory.

The Wildcats finished first out of the qualifying block and kept their rhythm throughout, earning a 1,287-1,229 win over Tecumseh in the championship match.

“We’ve made it to match play the last three years and been knocked out in the first round,” Northview head coach Harold Klukowski said. “This one is special. I brought the same exact team back from last year and the state didn’t recognize the guys. We came from unranked to No. 1.”

Just like the Kearsley girls, Northview rallied after trailing going into the regular game.

Tecumseh held an eight-pin lead after the two Baker games, but Northview won the regular game 929-863 with David Frey at 217 leading three Wildcats above 200.

“Experience and trust,” Klukowski described as the difference this year. “The guys didn’t bite, and they didn’t bicker. They listened to the coaches, and they executed. It was a grind in the Bakers. The guys struggled to find their shot early. After that, they settled in and made good shots.”

Tecumseh was making its second appearance in the championship match in four years after also finishing runner-up in 2019.

Despite coming up short of a title, there’s a lot of reason for optimism for Tecumseh with a sophomore-dominated lineup and only one senior.

“We were in the final four last year, so another step closer,” Tecumseh head coach Eric Wigner said. “We’ll just keep working at it, and hopefully next year will be our year.”

The Kearsley girls earned a 1,125-1,109 win over St. Clair Shores Lake Shore in a quarterfinal before defeating Carleton Airport in the semifinals, 1,264-1,220.