WATERFORD – The journey began a long time ago for the Flint Kearsley girls bowling team.

Nearly 10 years for some of the team’s seniors.

It didn’t begin when they entered high school four years ago. It began with a bus ride from Dowdall Elementary School to Richfield Bowl back in the second grade.

“I definitely started bowling for Kearsley when I was at Dowdall, in second grade,” senior Allison Robbins said. “It was fun. And now it’s my last year (at Kearsley) and it’s going to be hard to leave.”

Richfield offers an after-school bowling program for the Dowdall students. It busses the kids over to the bowling alley and offers the future Hornets a chance to get a head start on the competition. And it definitely has paid off.

Kearsley topped the competition at the Division 2 Finals on Friday at Century Lanes in Waterford, defeating reigning champion Mason, 1,186-1,166, in the title-clinching match. It was the school’s eighth Finals championship since 2012.

“We have the after-school program and a middle school program,” first-year head coach Kevin Shute said. “It really gets the ball rolling. By the time they’re freshmen, they’ve got years of bowling under their belt. They already know what they’re doing. It’s just a matter of going out and executing.”

Shute’s team executed from start to finish Friday afternoon. The Hornets were the top-seeded team out of block qualifying, shooting a 3,440, nearly 300 pins better than second-seeded Mason. They defeated Bay City Western in the round of eight before knocking off St. Clair Shores Lake Shore in the semifinals, 1,321-1,065.

Kearsley led Mason by 55 pins after the two Baker games and rolled a clean first frame (five strikes) to get off to a good start in the regular games. Seniors Megan Timm and Emilea Sturk rolled games of 190 and 188 to help their team hold on for the victory.

“It feels really good, especially beating the team that knocked us out last year,” Robbins said, wiping away tears after winning her third Finals team title in four years. “It’s great to be able to get that redemption and show that we are better bowlers than we were that day.”

Despite trailing after the Baker games, Mason did not give up. The Bulldogs collected marks in their first eight frames of the individual game and were within striking range entering the 10th frame. The 2020 champions were led by senior Grace Ann Whipple, who shot a 237 to lead all bowlers in the championship match.

Mason shot a 3,160 in qualifying and defeated Melvindale and Whitehall en route to the final.

On the boys side, Dearborn Divine Child rallied past Chelsea to claim its first-ever MHSAA Finals championship. Entering match play as the 3-seed, the Falcons defeated sixth-seeded Grand Rapids Kenowa Hills by 28 pins in the round of eight, then edged out second-seeded Tecumseh by just three pins, 1,385-1,382, in the semifinals. 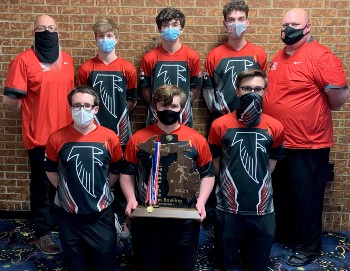 At that point coach Nick Ploucha’s team was staring at a matchup against fourth-seeded Chelsea, which was fresh off an upset win over top-seeded and reigning champion Jackson Northwest.

The Bulldogs rolled Baker games of 220 and 190 to take a 74-pin lead over Divine Child into the regular games.

“There are a lot of teams that scream and yell, hoot and holler, and we just kind of wait our turn,” Ploucha said. “We knew we were 74 pins down but we were patient and we began chipping away at the lead. The kids were dynamite. You could feel them start to move the locomotive, a little bit every frame, and they finished it.”

Sophomore Andrew Carl bowled a 231 to lead the comeback, while junior Paul Scheuher and senior Noelle Jackson rolled games of 226 and 210 as the Falcons shot a team score of 1,022. Seniors Adam Thompson and Shane Green shot 181 and 174 in their team’s win.

Just six years ago, Ploucha inherited a team that was returning zero bowlers.

“We’ve told the kids over the years to continue to be patient,” Ploucha said. “Last year, we wanted to just make it to the state Finals. We tried to have a good time this year, we wanted to qualify (for match play). Once we qualified, we just said, ‘Let’s see where this takes us.’ ”