First, the Bulldogs had to have felt like they won a championship after the semifinal round, when they did something no team had done during the previous six Division 2 Tournaments – beat Flint Kearsley.

Not deterred by the six-time reigning champion, Mason recorded a 1,245-1,157 win over Kearsley in one semifinal to earn a major boost of adrenaline.

“It really did,” Mason coach Terry Dormer said. “It gave us a big lift. It showed us that we could compete.”

But as significant as the win was over Kearsley, there was still a big obstacle to conquer for the Bulldogs.

Waiting in the final was Tecumseh, the Division 2 runner-up the last two years, champing at the bit to take home the championship trophy.

But Mason overcame that challenge in the closest possible manner.

Trailing by three pins after the two Baker games, Mason earned an 849-845 win in the regular game to claim the title.

“We had to adjust a bit on the lanes,” said Dormer, who concluded his 15th year as coach at Mason. “But they came back and did it.”

There was also a first-time champion on the boys side of the tournament.

Jackson Northwest claimed its first title in another close title match, toppling Cadillac 1,320-1,300 in the final.

Cadillac held a 23-pin edge after the first Baker game and a nine-pin lead going into the regular game, but Jackson Northwest hit bigger shots to prevail. 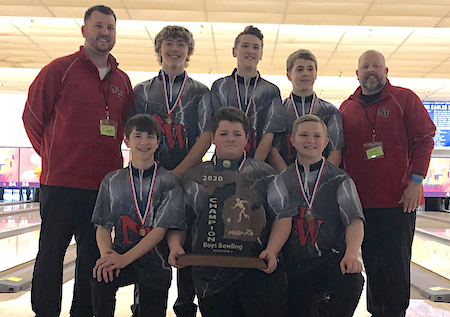 Northwest lost in the round of eight to eventual champion New Boston Huron last year, and coach Gerry Lobdell said that loss and experience served as motivation throughout the entire tournament – even when falling behind early.

“We were just trying to keep them calm,” Lobdell said. “Just one frame at a time for them. Just fill frames. That’s what we talk about all the time.”

Before beating Kearsley in the semifinals, Mason knocked off Muskegon Mona Shores in the quarterfinals by a score of 1,214-1,096.

Jackson Northwest earned a three-pin win over Grand Rapids Northview in the quarterfinals (1,333-1,330) before knocking off Iron Mountain in a semifinal, 1,309-1,242.

“It’s been an up-and-down season for us,” Cadillac coach Jeremy Moore said. “It just wasn’t our day, I guess. That team we bowled against, they threw good shots when they needed to. That’s really what it came down to.”

Visibly heartbroken afterward over falling short of a title for the third straight year and in such close fashion, the Tecumseh girls had finished third out of the qualifying block before beating Cedar Springs in the quarterfinals, 1,348-1,181.

Tecumseh then knocked off Carleton Airport in the semifinals, 1,188-1,073 to earn a spot in the final once again.