GOBLES — When it comes to high school bowling, Morgan Brunner and Alexis Diamond are perfect examples that the team sport is for anyone.

Brunner, a junior who began bowling when she was 3 years old, is the reigning MHSAA Division 4 girls singles champion.

Diamond, a senior, started bowling this year and has no experience other than birthday bowling parties.

In spite of the vast difference in experience, both are integral parts of the Gobles bowling team.

They also are the only girls on the boys team.

For the second-straight season, there was not enough interest to field a girls team, so Brunner and Diamond joined the five varsity male bowlers.

“When I first started bowling, I had to bowl against boys because in the U12 division in tournaments, we couldn’t get enough girls, so I’m kinda used to it,” Brunner said.

“It does help me because boys usually score higher, so it makes me work harder and harder.”

Diamond, who also is a member of the marching band, said bowling is similar in that it is not a gender-specific sport.

“The boys have embraced the girls as their own, and I think it’s made our girls better bowlers,” coach Karrie Brunner said. “Even though we do have a little bit of disappointment (because there is not a full girls team), it is fun to work with the boys, too.”

The Brunners, mother and daughter, were instrumental in starting the team.

When Brunner was a freshman, no bowling team existed at the high school.

“I promised Morgan that if she wanted to bowl in high school, I would coach her,” her mom said.

Athletic director Chris Miller gave the go-ahead, and a bowling team was born.

Interest in the girls team lasted just one year, so last year Morgan Brunner also bowled with the boys during the regular season. Girls are allowed to bowl on the boys team and then switch to the girls postseason as long as they compete in a minimum number of regular-season girls competitions.

At Regionals, “I was pretty much my own team,” the junior said. “I competed in individuals with the girls, which made me able to go to states and gave some of the freshmen (boys) who never bowled a chance to bowl at Regionals.”

Brunner made the most of her run at the state tournament.

Seeded third, she bested the sixth, second and top seeds for the title.

“I don’t think it really matters where you’re seeded,” she said. “If you work hard and get through all the matches, you should be good.

“You can come from the bottom and make it to the top.”

That experience has helped her become a better bowler, she said.

“Throughout my whole season so far, it’s taught me not to give up, even if you have a low game,” Brunner said.

“Stay positive throughout the day because that’s something I did at state, too, and it helped me.”

Having her mother as her coach is nothing new.

Her mom and dad, Scott, have coached her since she was a preschooler.

Her dad runs Scott Brunner’s Pro Shop at Continental Lanes in Portage, and when she was very young, “I’d go to the pro shop with my dad all day, so I would bowl all day,” Morgan Brunner said.

“I started bowling competitively at 9 or 10. I’ve just stuck with it since.”

During all those years, her mom, dad and grandpa Bill Keirns have been her three main coaches.

However, bowling every week with mom as a coach is a bit different than in tournaments.

“It’s mostly good,” Morgan Brunner said. “She knows what I’m working on and what I have to work on or if I need help on something.

“If I need something different and I don’t know what, she can help me with that. She tries to keep me positive.

“She knows everything about my game,” Brunner continued. “Even if she sees one thing that’s different, she’ll point it out and I’ll be like …” she said, shaking her hand.

Karrie Brunner said she is thankful for the bonding time with her daughter. 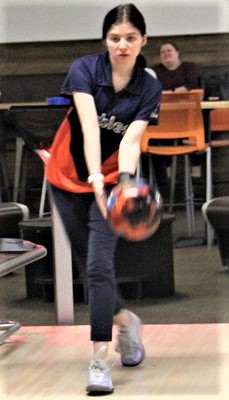 “I know sometimes it’s hard to have Mom around cramping your style, but I love that we get this bond and get to do this together,” she said.

“Her dad and I both coach her when she bowls individual events, but this just adds to the bond. To get to watch her become a leader on the team is really fun.”

Talking about wins and losses at home is a no-no.

“We have rules in our family that it stays on the lanes no matter what happens, whether it’s individual or team,” Karrie said.

“Scott and I had to develop that for our games, so we taught the girls that. She has to leave it at the bowling center.”

With no bowling center in Gobles, the team’s home house is Revel & Roll West in Kalamazoo, about a half hour away.

“It does pose some challenges, especially for the kids, but it was the best choice for us,” Brunner said. “We work with the kids if they can’t make it or need rides.”

New bowlers like Diamond have added to a worthwhile coaching experience.

Working with Diamond, “it’s fun,” Brunner said. “You’re teaching somebody to love the game that they can do when they graduate, when they get older.”

One area Diamond hopes to improve is “keeping my arm straight. It has a mind of its own,” she said.

Eric Phillips and James Goerke are the only other seniors on the team, and Oskar Wood is the lone sophomore. Juniors include Nolan Vanhorn and Owen Nuyen.

Brunner uses all seven bowlers in a match, subbing out so everyone has a chance to bowl.

The key to this year’s team is camaraderie, the coach said.

“The boys get along great and with the girls, I think they’re finally getting into their own skin,” Karrie Brunner said. “They’ve done it a couple years now, so everybody’s getting comfortable and they’re getting that desire that we can actually win.”

PHOTOS (Top) Morgan Brunner is returning for Gobles this winter after winning the Division 4 singles championship last season. (Middle) From top down, Gobles coach Karrie Brunner, Morgan Brunner and Alexis Diamond. (Below) Morgan Brunner warms up before a recent match at Revel & Roll West in Portage. (Photos by Pam Shebest.)