BATTLE CREEK – For 52 weeks, the Battle Creek Pennfield boys bowling team has been on a mission.

On Friday, its mission was accomplished. The Panthers, who felt frustrated a year ago after finishing second at the MHSAA Division 3 Final, left little room for error.

After winning its Regional a week ago, Pennfield led qualifying Friday morning to earn the No. 1 seed for the eight-team match play. After winning two matches – each by more than 100 pins – Pennfield led Corunna from start to finish in the championship match to register a 1,312-1,189 victory on its home lanes at M-66 Bowl.

“That was the focus all year,” Pennfield coach Mike Roach said of winning the title after finishing runner-up a year ago. “It really was the main goal. They were a little disappointed last year in the Finals as they didn't bowl as well as they had all year. Last year, we missed nine one-pin spares in the first four frames.”

“Every single tournament they've just gotten it done, getting ready for this. We had 948 the last game. You can't beat that.”

Sophomore James Ruoff led the way with 231 in the final game. He started the game with four strikes in a row to help jump on Corunna, which had four opens in the first frame.

“It was so good to get off to an early start, and everything settled in,” said Ruoff, who won the Regional singles championship last weekend. “There were nerves a little bit, but this is my home alley, and I spend more time here than I do my own house.”

Pennfield had a 1-2 punch of 200-plus scores in the title game as junior Sean Young rolled 222. Young struck in seven of the first nine frames before missing a spare in the 10th.

“I realized that we were going against a tough team,” Young said. “Corunna is a big team for us and a big challenge, and I've seen them the past three years.

“Our biggest goal at the beginning of the year was to win state. We said to each other, 'This is where we were last year. We need to step it up.' That's when I thought in my mind that I needed to step it up and hit my mark.”

Senior captain Max Jackson, a left-hander, made his last team game a memorable one. After a spare in the first frame, Jackson had opens in his next three frames, leaving him with 43 through four frames.

“I’m not happy at all,” Jackson said of his thoughts at the time. “I'm struggling, and it's my last chance. I have to give it all I've got. I just mentally regrouped and knew it was time I needed to step it up a little bit. I'm the captain, and I need to show my team the way.”

After having just 43 in the fourth, Jackson finished with 187, and the resiliency he showed did not surprise his coach at all.

“He's done it all year,” Roach said of Jackson, who qualified third individually in the Regional. “He finished with six in a row. This year he really stepped up his game.”

Corunna, which qualified third, was paced by four bowlers bunched in the 160s as it had 782 in the final game.

The 39-foot Kegel “Allen Pattern” presented a challenge for the players. The last spot in match play averaged 171.1, and the Panthers averaged a tournament-best 182.9 over the eight Baker games and two regular five-player games.

“This is a hard house to score in,” Roach said. “But I always say no matter where we are, everybody is bowling on the same condition. We give ourselves an advantage because all year we bowl on the high-school pattern – our dual matches, we go to tournaments that have it – so we practice on it all year.”

The Birch Run girls figured out the pattern better than the others as they won the first bowling MHSAA Finals championship in school history. 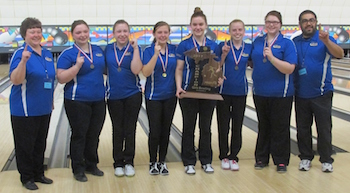 “It was a very tough shot, and I enjoy it as it brings out the best in everybody,” Birch Run coach Teddy Villarreal said. “It's more gratifying to know that because this shot is what we practiced for. We practice this shot.”

After finishing seventh in the qualifying session, Birch Run downed No. 2 seed Alma and topped No. 6 seed Hudsonville Unity Christian to earn a spot in the Final against top-seeded Gladwin.

Birch Run had a 20-pin lead after the two Baker games and seemed to have the match in hand going into the 10th frame. But two of the first three Panthers opened in the 10th, while all three Gladwin bowlers either struck or picked up their spares.

That set the stage for senior Tessie Birchmeier, who sewed up the championship with three strikes in the 10th frame for a team-high 195 as Birch Run defeated Gladwin 1,053-1,013.

“It was really nerve-wracking, and in that 10th frame I was freaking out,” Birchmeier said. “I felt like I was going to pass out, but I didn't, luckily. It was very nerve-wracking.”

After winning the title, the nerves were gone but the excitement remained.

“Oh my gosh, it's like the best thing I've ever felt,” she said. “After we won, it was so relieving, and all we did was cry.”

Sophomore Madison Hoffman was second for Birch Run with 171.

“It's very overwhelming. Definitely,” she said. “I had to make a lot of adjustments during the game. You just kind of have to take it by time and keep going.

The third-best score on the team came from senior Kendra Grady, who bowled 153 in the championship match on the day before her 18th birthday.

“This is what I wanted for my birthday,” she said. “And there is the Individual Finals, too. That could be the frosting on the cake.”

Denise Bryce added 125 and Madison Barlow shot 109 in the title match for Birch Run, and Morgan Hawkins got to bowl late in the match. Gladwin was led by Bailey Weston with 165.

Birch Run had to overcome a stumble early in qualifying as it shot 113 in the third Baker game before reeling off games of 193 and 171.

“I just let them know it was a bad game and to get over it and move on, and they did,” Villarreal said. “This is something we planned, and we talked about what we needed to do to get here. It was to practice on things like spares and the mental part of our game and dedication.

The title meant a little more to Villarreal for reasons he would not disclose.

It seems champions often share one common bond: The ability to persevere and rise to the occasion when it is needed the most.

Jackson, the Pennfield senior captain who finished with six strikes for a 187, summed it up.

“We've been talking about it since Day 1,” he said of the championship. “We've always talked about this being our ultimate goal, and to get here and do it is just amazing.

“We had the team, and we had the opportunity, and we grabbed it.”