STERLING HEIGHTS – When Davison junior Taylor Davis was 8 years old, her father Bryan pulled her aside and asked her what she wanted out of her short bowling career.

Mind you she was only 8 at the time, but the answer she gave proved she was way wise beyond her years.

"I want to win a state championship and bowl a 300 game," she said.

Little did Bryan know those words would become reality nearly a decade after she said them, as Taylor Davis became only the fourth in MHSAA girls bowling history to bowl a 300 game in the singles portion of the tournament, and the first in a Final on Saturday at Sterling Lanes in Sterling Heights.

Davis captured the Division 1 title with a 479-410 victory over Julia Huren of Westland John Glenn.

"I knew it was going to happen eventually, but to bowl your first 300 game on high school bowling’s biggest stage is almost unheard of," Bryan Davis said. "To see my daughter step up and roll that final strike for her first 300 game was almost surreal. Then to watch her win a state championship is something I will always remember."

Taylor Davis admits she had butterflies in her stomach, but knew if she threw a good shot good things would happen.

"It was amazing,“ Taylor Davis said. “I’ve always wanted to shoot a 300. I was always wondering when I would be able to. To shoot it at the state finals is the best feeling ever. ... After I bowled in the final four on (lanes) five and six I kind of found a new shot. I tried it on seven and eight and it was fine. It worked.”

Kara Richard of Tecumseh had a 300 game twice in 2008 in Division 2 during qualifying and then the Round of 16, while Rachel Ringrose of South Lyon accomplished the feat in 2007 qualifying and Felicia Goll did the same for Harper Woods Regina in 2005. 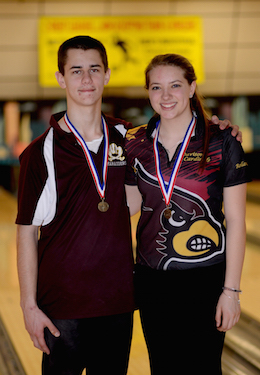 Davis summed up the weekend's efforts in one statement.

"To be able to win a state title with my team, then come back and win an individual championship and then shoot my first 300 game with my friends and family watching is something I will always remember," she said.

"I can't wait to get back here and do it all over again next season."

For Warren Mott’s Brad Delmarle, the long grind of a 14-game day came to an end as he downed junior Gabe Cassise of Wyandotte Roosevelt, 459-393, to claim a title for the Marauders.

“It was a grind,” said Delmarle. “This is a big accomplishment. A lot of practice, and I’m very proud of what I was able to accomplish.”

Delmarle started both games of the Final with a three-bagger, forcing Cassise to play catch up. In the end, Delmarle was too strong down the stretch and came away with the championship.

"The state finals is all about mental preparation," he said. "We are all tired out there, but you can't let that get to you. You have to keep focus and continue to throw good shots. I couldn't be happier with my performance today."

In the girls Semifinal, Farmington Hills Harrison’s Candyce Bradley had Davis on the ropes after the first game, up 29 pins going into the second. Davis would later prevail 392-358 over Bradley.

In the other Semifinal, Huren dominated Stephanie Schalk of St. Clair Shores Lakeview, posting a 257 game on the way to winning 430-361.

Open frames were Jordan Nunn’s undoing in a boys Semifinal. The Flint Carman-Ainsworth senior fell to Cassise, 444-415. Delmarle prevailed in his semifinal over Mike Maguran of Sterling Heights Stevenson, 423-370.

"I couldn't string together anything in the semis and I fell behind," Nunn said. "I qualified fifth on the day, and I was extremely happy to get as far as I did. Watching Taylor throw 300 today was pretty cool. It was definitely a great day for the Saginaw Valley League."

Taylor Davis of Davison throws a 300 in the first game of the D1 girls final @detroitnews @detnews_sports @MHSAA pic.twitter.com/0WoRKJZoDW