Schnicke placed among the elite of her league and the state’s best high school bowlers as well during her first two years rolling for the Fighting Scots. But this winter she has been even better, upping her average and winning her Division 1 Regional in singles Saturday with a six-game score of 1,241 – less than a year after losing parts of two fingers from her bowling hand in carpentry accident – to earn the Michigan National Guard “Performance of the Week.”

Schnicke was fresh off making the MHSAA Finals match play last March when, while building a clock in an industrial arts class at school, she cut off nearly the entire top joint of her left ring finger and the tip of her left middle finger. She bowls left-handed, and feared her career was over. But using a ball drilled to fit the changes on her hand, Schnicke built her skills back up – and this season is averaging 203 pins per game, up from 193 as a sophomore and 187 as a freshmen. Her averages this season and as a freshman were tops in the Ottawa-Kent Conference White, and her average last year was second in the league. Schnicke also has anchored her teams all three seasons, and last year helped Caledonia advance to the Division 1 Team Finals match play quarterfinals – she was named to the Division 1 all-state third team when the season was done. Caledonia is 44-0 in regular-season matches during her career, with three league titles.

Schnicke will bowl in the Division 1 Singles Final on Saturday at Sterling Lanes in Sterling Heights. She also used to play softball, but now spends her time away from the pins in a much quieter space than the bowling center, hunting and fishing with an eye on a career in conservation.

Coach Eric Bottrall said: “Brittney is a very competitive bowler that loves to bowl. Brittney practices relentlessly. She is a little emotional when she bowls, but that shows how bad she wants it. She is hard on herself, but expects to do well every time she bowls. Brittney has come up big when the team has needed her over the past three years. Being anchor has a lot of pressure involved, and Brittney thrives on it. We have won several tournaments, and Brittney never backs down when we need a big shot at the end of the game. She wants the last shot, and I believe in her. Brittney is a great listener and leader. I’m blessed to coach her, and she’s an inspiration to me. With all that Brittney went through last summer with her accident, to come back better than last season … that just shows the heart and dedication she has to be a better bowler.”

Performance Point: “I enjoyed being with my team the most. When we bowled singles, I was right next to the rest of my team the whole time and my coach was there the whole time to help me out. It relaxes me; it lets me know that I have support so I don’t have to do it alone. During the first couple of games, I was doing really good, and I thought if I just kept doing it and picking up my spares, I would probably place pretty good."

Comeback trail: “When I first cut (my fingertips) off, the first thing I said to my teacher was that I wouldn’t be able to bowl; my season was done. A couple months later when it healed up pretty well, the first time I bowled, it was pretty scary. I thought I would do badly the whole season, but my coach, he supported me through the whole thing and helped me out. It was a hard time. (But) I went into a tournament one weekend, and I did pretty well, and I thought if I could just keep doing that …” 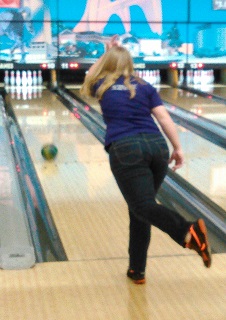 Telling the tale: “I tell them what happened. They just asked how I can bowl with it. They’re pretty surprised. It still surprises me, but I’m getting there where it’s not as bad. The hardest part was getting used to the new way that my ball was drilled, and the easiest part was probably coming back with support from my teammates and my family.”

The natural: “I started (bowling) when I was 12 or 13. My dad (Chuck), he bowls a lot (and) he helps me a lot. He signed me up for a Saturday league, and after the league he would help me practice. I got a lot of support from the coaches in that league, they helped a lot, and it became easy for me. At first I thought I was really bad, but it actually came really easy for me. It was pretty natural for me, I guess.”

The great outdoors: “I like how relaxing it is, and quiet, and I like doing stuff with my dad especially. I want to be a DNR (Department of Natural Resources) officer. I’ve heard about them my whole life, and I always wanted to do that kind of stuff. And I hate hearing about poachers; I just want to catch them.”