The Ford senior and four-year varsity standout earned her top achievement of many this winter, winning the Macomb County Singles Tournament championship Jan. 19 to earn the MHSAA “Performance of the Week.” for the week of Jan. 13. Holland won the final by 10 pins over reigning Division 1 runner-up Dani Decruydt of St. Clair Shores Lake Shore.

Holland made the MHSAA Singles Finals as a freshman in 2017 and narrowly missed returning as a sophomore, falling just 26 pins shy with a 13th-place Regional finish. A pair of rough games doomed last season’s Regional effort, but Holland has raised her game for her final high school season. She rolled five games (out of nine) of 200 or higher at the County tournament, including a 212 in the semifinal and 205 in the championship match. Holland’s overall average this season prior to this past weekend was 188.5, with a high game of 279 and high series of 657. She’s finished among the top 10 at five tournaments total this winter, including also as runner-up at the Utica Singles event.

Holland began bowling at age 3, following her parents into the sport. Her father James Holland coaches Ford’s girls varsity under Roger Beaty, who oversees the school’s entire bowling program. Holland also has played softball most of middle and high school – not coincidentally, using her powerful right arm as a pitcher – and she may play softball again this upcoming season after taking off last spring to focus on honing her bowling skills. Holland carries a 3.26 GPA and would like to study marketing and business at the college level, where she also hopes to continue her bowling career.

Coach Roger Beaty said: “This weekend proved to Kensington, and her local area, that she is a force to be reckoned with. She has always been buzzing near the top tier of girls bowlers, but this year she is seeing the results from her years of hard work. She is a grinder and always has a game face on. This win is exactly what she needed to catapult her into Regionals preparations. Her goal this year was to qualify for States. She will keep working to be ready. I feel she can be a top bowler in the state. She does not let her emotions get to her during competition, and she has a solid technical game.”

Performance point: “Just rolling the last shot and realizing I'd won, and being able to look up at that scoreboard and see that I won the game,” Holland recalled as her best memory from the County win. “Because I didn't think that I was going to. She started off doing better than me, and I wasn't too sure.  I just tried to make sure that I was doing the best that I could until the game was over. Anything could've happened, which it did.” 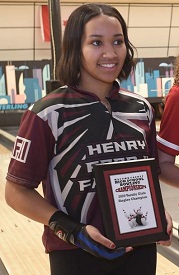 Bowling boost: “I have to make sure to do my best and try my best because since I won this, I know I can do a lot more. It let me know I'm capable of winning a lot more tournaments ... because this was a really important one. … I've been bowling for a long time now. It comes natural to me, so I know what I can do. I know I'm capable of winning things when I really set my mind to it.”

Dad taught me: “To take my time. He taught me a whole bunch of techniques. And to try my hardest (because) I can do anything. … Sometimes I would just go to (my parents’) leagues and just watch them and see how much fun they had. … It’s just a fun sport for me. I just love to do it. I love being in bowling alleys. It’s a fun environment.”

Firing fastballs: “(As a pitcher) I’m able to throw the ball a little faster because I’m used to carrying a 15-pound bowling ball. (Bowling) helps with the swing of my arm; I swing the ball back when I bowl.”

Postseason plan: “To make it past Regionals and hopefully do good in states. I just know I need to try to score my highest, change my techniques if I have to for the different oil patterns.”

PHOTOS: (Top) Utica Ford's Kensington Holland begins her approach during the Macomb County Tournament bowled the weekend of Jan. 17. (Middle) Holland poses with her award after winning the championship. (Photos courtesy of the Macomb Daily.)