As fall sports playoffs commenced, Traverse City Christian was seeking its first ever MHSAA Finals championship in a girls sport.

Then the Sabres’ volleyball team reached the Regional Finals, and thoughts of a state title were on the school’s collective mind.

But those hopes ended at the hands of Leland.

If you’re one of the Sabres, that’s bad.

Yes, but winter sports were on the horizon and girls and boys Regional bowling titles had been numerous in years past. And the girls team graduated only one member of the 2020 team that reached the Division 4 semifinals and fell 10 pins shy of the championship match.

That was bad, and frankly sad for many student-athletes.

In February, the pause button was released and the Sabres bowling teams were ready again to pursue Division 4 titles.

Fast forward a bit and the girls managed to let the Regional title slip out of their hands, 52 pins short of champion Ishpeming Westwood. They lost a 90-pin lead in the final game.

Oh, supporters and the girls would agree that’s bad.

Not really, as the Sabres’ runner-up finish qualified them for the Finals. 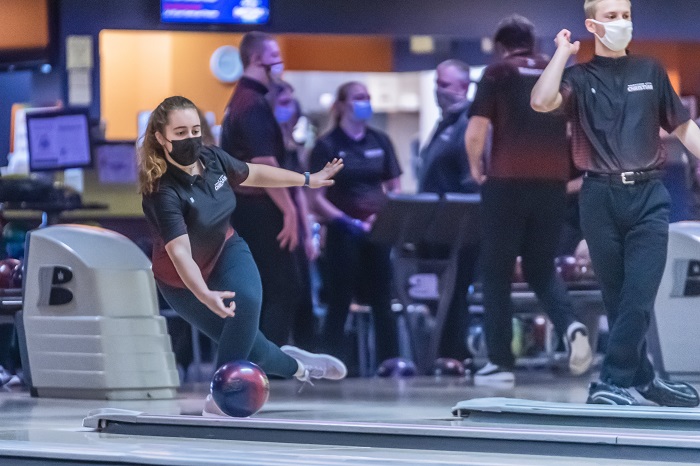 Indeed! They topped Ishpeming in a semifinals rematch on their way to claiming the first girls sport Finals championship in the school’s history.

“We thought we were going to win one (Regional) this year,” said Brent Wheat, one of the Sabres’ three girls and boys bowling coaches and the school’s baseball coach. “We were in the lead (at the girls Regional) and the individual mental side of things kind of took over that last game and got in their head a little bit, and it impacted the outcome for the team in the end.

“We gave up the lead, and I think that was a big growing lesson for them, and it was a lesson the coaches really hammered in that next week before the state finals.”

TC Christian’s boys bowlers did win their Regional and nearly upset top-seeded and eventual Finals champion St. Charles in the opening round of that tournament’s match play, coming up 21 pins shy of the victory. The Sabres’ Hunter Haldaman, Jeremy Hansen and Ella Wendel also competed in the next day’s Singles Finals, with Wendell finishing runner-up and Haldeman reaching the semifinals as both made the all-state first team.

“It was quite a year for TCCS bowling – two conference titles, a Regional boys title and a girls state championship,” noted coach Andy Radtke. “It's shown them what hard work, teamwork, and a never-give-up attitude can accomplish.”

The girls team’s character is what impresses their coaches the most.

“They encourage each other, and they are respectful to their coaches and opponents,” shared coach Judy Radtke, who also teaches at TC Christian. “It was wonderful for me to have several coaches from other teams at the Finals tell me how much they enjoyed bowling with our girls and how nice they were.

“As coaches, we seek to use bowling to help build character in our players, and I'm thankful they were able to demonstrate that on such a big stage.”

The three coaches, who are all related, aren’t really surprised the girls became Finals champions in less than 10 years of competing.

“Andy, my father-in-law, and I talked about it after we won,” Wheat said.  “We used to go down there (to the Finals) and look at these teams and go ‘Man, I wonder what that feels like to be that team that wins.

“‘I wonder what it feels like to have that program that can compete at that level,’ and all of sudden we’re sitting in that position,” he continued. “It is hard to process.”

Mounting successes are what Andy Radtke points to for the real lack of surprise. Traverse City Christian’s girls had won Regional championships three of the last four seasons entering this one. 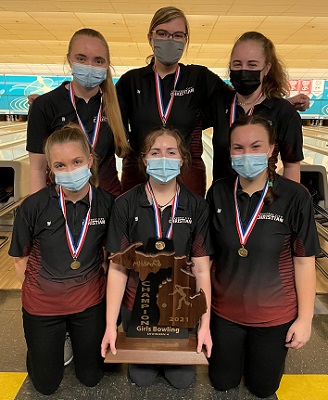 “I’m very pleased, but not surprised,” he said. “During the 2019-20 season they were conference and Regional champions.

“They also did very well at states – finally losing in the semifinals in a very close match,” he continued.  “I’m convinced that experience served as a springboard to this year winning the championship.”

Christian’s small enrollment, fewer than 75 students in the high school, is a source of pride for Judy Radtke.

“To be able to successfully compete against schools that are significantly larger than ours feels really good,” she said. “Our school has had several girls teams, in all sports, do well in postseason play.

“Being able to be the first team to win that Finals trophy is incredibly exciting.”

“They really buckled down and performed above their years from what we have seen mentally,” he said.  “They seemed much more grown up in their competing.

“Being able to control the mental side of it at that level is the difference in champions versus just coming up a bit short,” he explained. “They were able to work through it largely from what had happened the week before.”

The Division 4 Finals title has the school’s athletic director Micah Gallegos beaming with pride for both the girls and boys bowling teams.

“We have great kids who work really hard to develop themselves and their game,” he said. “It is evident that we have created a recipe for success.”