MUSKEGON – Being the best bowling team in the city of Plymouth is saying something.

With two boys bowling teams from Plymouth reaching the elite eight of the MHSAA Division 1 Bowling Final, the city stamped itself as one of the best for bowling in the state. For the Plymouth Salem boys, adding the Division 1 title meant that not only were they the best in Plymouth this year, but the best Division 1 team in all of Michigan.

Salem claimed the Division 1 team title at Northway Lanes by defeating Saginaw Heritage 1,388-1,258 in the championship match. While Salem has reached the MHSAA Finals three of the last five seasons, this year it reached the pinnacle.

“This feels awesome,” Salem coach Kathie Hahn said. “I can’t explain it. I’m so proud of the boys. There are three schools on our ground, and two of them qualified for state, Canton High School and us. To win state was awesome to say the least.”

While Salem won by more than 100 pins in the final match against Heritage, the road was a difficult one. Salem won a dramatic quarterfinal by defeating Roseville 1,356-1,350 in a match that came down to the final frame.

Salem senior Kevin Williams picked up the deciding spare in the 10th frame to give Salem the win and send it on to the semifinals.

“This was very special,” Williams said. “I made it to state as a freshman, but things did not go so well. This year we had a great team and it was a blast. The key for us was keeping our heads up and not getting down on ourselves, and picking up spares.”

After surviving the quarterfinal match, the Wildcats then met Jackson High in the semifinals. Salem started strong and continued to bowl strong all the way through as it defeated the Vikings 1,386-1,172.

Heritage earned its way into the final match by defeating hometown Muskegon Mona Shores 1,292-1,209 in the other semifinal. Salem came out strong against Heritage and built on the lead as the match played out.

“We struggled to pick up spares all day, but in the last few matches we really started to pick them up,” said aptly named Salem senior Jimmy Bowling. “Every one of our bowlers but one shot over 200 in the final game against Heritage. We are a close team, and we are all good friends away from bowling. We are all like a family on this team.”

Steven Cadwell led Salem with a 213 game in the finale while Williams rolled a 207 and Tyler Snyder a 204.

No matter which team won it was going to be a first as neither Salem nor Heritage had won an MHSAA bowling championship before.

“It was kind of an unbelievable day,” Heritage coach Todd Hare said. “We started out bowling really well today. We had good rotations and we came out of qualifying as the number one seed. We just fell a little short in the last match.”

Derrick Norman led Heritage with a 193 in the finale while Tyler Sutt rolled a 192. 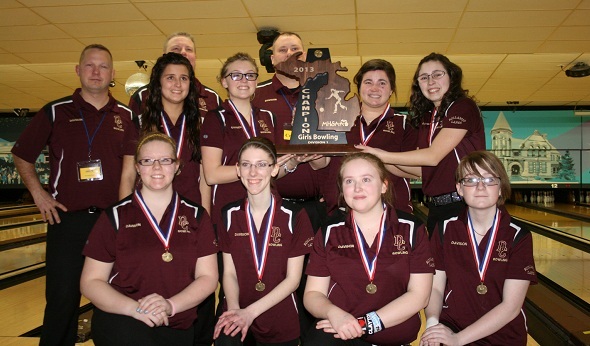 While Division 1 had a new boys champion, it saw a repeat champion on the girls side as the Davison bowling powerhouse produced a second consecutive title.

Despite losing five seniors from last year’s squad, the Cardinals re-tooled in hopes of making it back to the Finals.

“At the beginning of the season, not many people expected us to defend our state championship,” Davison coach Albert Torok said. “We lost five seniors from that team, but we had a lot of talent stepping up. We prepared ourselves all year for this. We entered tournament after tournament and progressed day after day, and all that hard work paid off.”

“This is 10 times better then last year,” said Heather Baur, one of three seniors on this year’s team who also were part of last year’s title win. “It’s exciting because the seniors did something that no one else had done. The biggest thing that helped us was just filling frames. Our coach tells us if you fill frames, you win games.”

Davison reached the final match by defeating Sterling Heights Stevenson 1,306- 1,224 in the semifinal and Westland John Glenn 1,256-1,178 in the quarterfinal.

“This feels awesome,” Davison senior Jennifer Phillips said. “It feels so great to win it again. I couldn’t be any more proud of my teammates. Last year after we won it, we knew we wanted to come back and try and win it again.”

Brianna Palarchio rolled a 194 to lead Walled Lake Central in the Final. Sydney Brown rolled a 234 for Davison, and Brooklyn Greene added a 202.