By Andrew Frushour
Second Half

BATTLE CREEK – Sandusky senior Melissa Sleda has faced Vandercook Lake’s Malloree Ambs with championships on the line a number of times over the last four seasons.

Most recently, Ambs came out on top – including beating Sleda in a Singles Quarterfinal a year ago on the way to winning the individual title.

Sleda earned one more chance against her standout opponent during Saturday’s MHSAA Final – and took the lead role in their final chapter.

“Going from last year, I tried to put the past behind me. I thought about the present, just focused on every single ball, made sure I had my timing, hit my mark and everything felt good,” Sleda said. “Strikes just come if I hit my mark.”

After qualifying sixth Saturday morning, Sleda rolled a 245 during her Round of 16 win. She then eliminated 2013 singles runner-up Paige Huebel of Oscoda, 396-288, in the Quarterfinal before edging Ambs’ teammate Jessica Bunch 378-356 in the Semifinal.

The opportunity to face Bunch and Ambs was a tad bittersweet for Sleda – Sandusky had faced Vandercook Lake in the Team Finals championship match the last three seasons, but didn’t advance to the title match Friday as Vandercook Lake went on to repeat as champion.

The Singles Final was her chance to finish on a positive note. 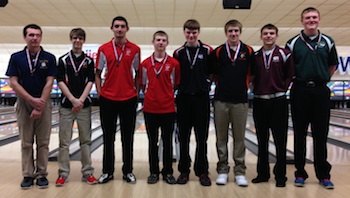 “The first match I bowled the 245, and everything felt right,” Sleda said. “The fifth frame of the second game, I was just like ‘Wow. This might be the year, finally.’ I just kept thinking this is my year, you’re a senior, go out with a bang.”

Tuttle qualified first during the morning, but just edged Lakeview’s Joey Cole 337-311 in the Round of 16 match play. After the Budnik match, Tuttle survived Budnik’s teammate Alex Darga 359-350 – after not being able to watch Darga’s 10th frame. Tuttle's future wasn't decided until Darga's final shot

“It must’ve been meant to be after that. I just got up and bowled,” Tuttle said.

He came back to beat Tri-Valley Conference West foe Zach Fenby of St. Louis 406-325 in the championship match thanks to four strikes over the final three frames of the first game and a string of five straight strikes during the second.

“The first two matches I was so nervous,” Tuttle said. “The third one, the last one, I was as calm as I’d been all day.”