CANTON – One and done.

But that one was awfully sweet for the St. Charles boys bowling team.

The Bulldogs, who were shut out of the Singles Finals this year, put their energy into the Division 4 Team Finals at Super Bowl in Canton on Friday.

After a tense back-and-forth battle with No. 2 seed Manchester, the top-seeded Bulldogs pulled out their Finals title by just eight pins, 1,167-1,159, in a match that went down to the 10th frame between the anchor bowlers.

St. Charles had won the Baker competition by 43 pins, only to see Manchester win the regular games by 35, creating the razor-thin finish.

It was the second boys bowling Finals title for St. Charles, which also won in 2010, and the third overall Finals championship for the school. The Bulldogs won the Division 7 football crown in 1999.

Traverse City Christian’s girls won their first Bowling Finals title – and in fact the school’s first Finals title in any girls sport. It came on the heels of a trip to the semifinals last year.

“We were 39 pins ahead after the Baker and we were able to stay real close in the regular game,” Sabres coach Brent Wheat said.

“It was real back-and-forth,” Wheat said. “We had all marks in the ninth frame and we were about even, so we knew they had all the pressure on them to try and come back. All we had to do was keep making spares and we would come out on top, and that’s what we did.” 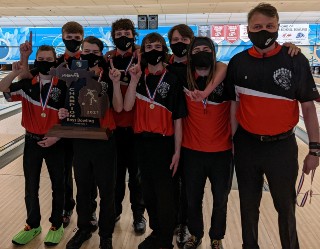 The Sabres boys gave St. Charles all it wanted in the quarterfinals before the Bulldogs pulled to a 21-pin victory.

“We again had the Baker lead but we struggled,” Faupel said. “We had a 715 (score) and their anchorman needed a strike on the first ball of the 10th frame, and he leaves a Greek Church split (4-7-6-9-10), and it’s just so much exhilaration.”

Faupel, who created the team back in 2006, saw the Bulldogs end in the semifinals in 2016 and 2018. For him, the pain of losing those seasons was matched by the thrill of getting that second championship.

But, first, Faupel and his team had to overcome the disappointment among its five seniors, all of whom fell short in Regional singles last weekend.

“I told them that’s gone,” he said. “I said we had a chance to win the team title, and we took full advantage.”

As a result, Faupel’s time with the trophy was brief, lasting only as long as the ride home.

Wheat, for his part, was staying in a hotel preparing for Saturday’s individual tournament.

“The girls are probably sleeping with their medals,” he said. “I’m going to sleep with the trophy at least one night.”

The difference, he said, came in his team’s performance in Baker competition.

“We were able to get a 20-to-30-pin cushion in every game,” Wheat said. “Just a few pins, but that cushion really helped with nerves.”

After St. Charles celebrated its victory, Faupel gathered his bowlers.

As it turned out, the relief and joy of winning had eyes misting over from bowlers, coaches, and parents.

“It was a special moment,” Faupel said.

For the Sabres, there were tears as well after winning a title following the disappointment in the 2020 semifinals, when they lost in the 10th frame.

“The girls did it themselves, making sure that didn’t happen again,” Wheat said.