JACKSON – Two hands were better than one Saturday afternoon in the championship match of the MHSAA Division 3 boys singles bowling tournament at Airport Lanes in Jackson.

Adam LaRoe of Napoleon, who uses the same unorthodox two-handed delivery as PBA touring professional Jason Belmonte, came from behind to defeat William Holmes of Ferndale University 373-368 in the two-game title match.

LaRoe, a senior who qualified ninth, is a right-hander who uses a five-step delivery as he unleashes the ball from his side with both hands.

“I’ve been throwing it that way ever since I was little,” LaRoe said. “I couldn’t pick up the ball one-handed, so I just started throwing two-handed.”

When asked if he felt that gave him any sort of advantage, LaRoe said, “Sort of. I get more pin action.”

Napoleon coach Randy Chesney said he was sort of taken aback when he first encountered LaRoe and his unorthodox style.

“I was trying to figure out how I was going to coach him,” Chesney said. “He’s been doing it since he was a little kid, and he hasn’t done anything else. So we just learned that we had to adapt to it and go from there.

“He’s been a lot more consistent this year, and we haven’t had the ups and downs.”

LaRoe stayed consistent in qualifying as none of his six games were lower than 180 or higher than 204. He remained that way throughout match play with only his 168 in the first game of the semifinals not falling between 180 and 204.

LaRoe nearly was sidelined in the quarterfinals when he edged Tyler Windahl of Ishpeming by one pin, and he entered the title match after averaging 189 for 12 games through the semifinals.

LaRoe’s opponent, Holmes, qualified 14th and got hot in match play, averaging 209 for the six games in the round of 16, quarterfinals and semifinals. Holmes defeated LaRoe 199-181 in the first game of the two-game title match before LaRoe came back with a 192-169 victory for a 373-368 triumph.

A turkey in the third, fourth and fifth frames of the second game got LaRoe back into the match, and open frames by Holmes in the fourth, sixth and eighth frames helped pave the way to the title for LaRoe.

When LaRoe stepped onto the approach for the 10th frame of the second game of the title match, he needed a strike or a spare to win the championship. He threw a solid strike.

“It was a relief,” LaRoe said. 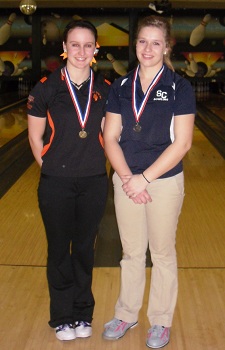 While LaRoe’s two-handed delivery was much different than the rest of the bowlers in the boys division, Ball’s road to the girls finals was just as unique. A year ago, Ball was a cheerleader at Armada, and bowling wasn’t even on her radar.

“Cheerleading was fun, but I was a gymnast, so it was more of the gymnastics that I was interested in,” Ball said. “Everybody was talking about how bowling was so much fun, so I thought I’d give that a try. I had bowled in middle school; we had a Saturday night league, and it was fun.

“I didn’t know if I could do it in high school because I threw a straight ball, and I didn’t think that was good enough. So I asked (Armada coach) Dave Walkowski, ‘Can you teach me to bowl?’ And he taught me how to bowl.”

Walkowski praised Ball for being so coachable.

“It’s very incredible when they want to listen and not give you a hard time about it.”

Ball was the 15th qualifier out of 16, and in the round of 16 she faced Noelle Scheuer of Richmond. Scheuer had eliminated Ball in an earlier tournament, and Armada has a strong rivalry with Richmond.

Ball shot 204 and 199 to win her match against Scheuer, then she rolled 219 and 214 to win her quarterfinal match. In the semifinals, Ball had to rally after losing 180-153 in the first game. She defeated Samantha Kubiak of Frankenmuth 208-172 in the second match for a nine-pin victory.

Awaiting Ball in the final was VanSledright, who threw a 290 in the first game of her semifinal match and went on to sideline Loretta Hinds 469-436 in a high-scoring match. And Ball noticed.

Ball defeated VanSledright 175-154 in the first game of the two-game match, but opened the door in the second game with open frames in the third, fourth and fifth frames. She finished by marking in her final five frames and, although she lost the second game 168-163, it was enough for an overall 16-pin victory.

VanSledright said she had trouble solving the championship pair.

“Coming into the last game, I was excited, but I was definitely struggling in the last game,” she said.
“Nothing was hitting. It was the toughest lanes I’ve bowled on here in this house.

“I couldn’t strike enough or pick up my spares.”

When Ball stepped on the approach for her 10th frame in the second game, all she needed was at least seven on her first ball to win. She threw a strike.

“My heart was pumping, and it felt amazing,” Ball said. “My heart just sank, and I knew right then and there.”