However, Zeeland isn’t short on talent this winter as it returns everyone from March’s run to the quarterfinals.

"I think having everyone back is great, and also having a full season,” said Zeeland coach Tony DiLaura, whose team lost to eventual runner-up Belleville at the Finals after qualifying fourth to match play.

“Last year we started after the new year, and having the first six weeks leading into the new year has been great. Having everyone back, and even a couple of reserves who can still roll high 100s and low 200s, is super exciting for us.”

The team, which is comprised of students from both Zeeland West and Zeeland East, won a Regional title as well last season.

“I was very upset to say the least that I could not bowl,” Fortney said. “I was kind of bummed and disappointed that I could not be there to help my team, but I’m happy to be back and this is a fun team to be with."

Zeeland won the program’s first Finals crown in 2020, and watched as neighborhood rival Hudsonville collected its first title with a win over Belville in the championship match.

“We were obviously very happy with coming in fifth in the state, and there were some great teams out there,” DiLaura said. “We bowl out of the same house as Hudsonville, and they are good friends of ours. We’ve had several friendly competitions against them, and bowling is like that. Sometimes the pins fall your way, and sometimes you don’t get the carry.” 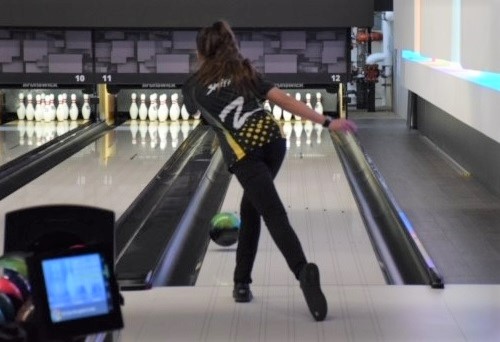 All of Zeeland’s returnees have experience bowling on the big stage, and it’s created heightened expectations for this season.

“It’s very beneficial because they’ve been there before, and they know the pressure of that arena,” DiLaura said. “Having been there twice already, they’ve been put in those situations and have risen to the challenge.

“Hopefully we will be back this year, but we have to earn our way there. I think the goal for us is to just bowl our game and not put any pressure on ourselves. We will let the season unfold in front of us and see what happens, but having been there in the past does bode well for us.”

There are two sets of sisters among the top seven, and the entire team has become a tight-knit group.

“It’s so nice to have everyone back because we have that bond together and we know we can work off of each other,” said Morgan Smith, who qualified for singles at the Finals and reached bracket play before being knocked out in the quarterfinals. “We have seven strong girls and a couple freshmen who are pretty strong and learning.

“We know if someone is struggling or having a bad day, we always have backups that can put up good scores. It’s a lot more comforting and takes away some of the pressure.”

Zeeland’s depth has played a major factor in its recent success.

“We go pretty deep down to our seventh bowler,” DiLaura said. “We know we can put in any bowler and feel confident that they can finish the game off or step in for the next game and perform at a high level.”

Rylee Smith joined her sister as a Finals singles qualifier last season. Both girls grew up around the game before taking it seriously once Morgan Smith started high school.

“It’s fun bowling with my sister,” Morgan Smith said. “Most people think we have a lot of competition between us, and we do sometimes, but it's definitely fun because we know each other’s games so we are the first person to go to each other when we have questions. It’s nice to have someone right there who knows your game almost as well as you do.”

The Fortney sisters also have a friendly rivalry between them.

“We used to be very competitive with each other, but we realize that it doesn’t matter who is the better sister,” Brianna Fortney said. “We have to show up for our team and be there for them.”

Morgan Smith’s showing at last year’s Finals was the culmination of the work she put in to improve.

“I went in with low expectations last year because there were so many good bowlers that made it, so making it as far as I did was really exciting for me,” Smith said. “It showed me what I can do after putting in the hard work. That the results will come. I’m excited to try and do that again this year, and last year was definitely a cool experience.”