In the end, Birmingham Seaholm senior Audrey DaDamio had the fastest time in the two heats that were run in a cross country final that was redesigned to limit the size of races in the year of COVID-19.

DaDamio, who ran the first heat with individual qualifiers and runners from third-place teams at Regionals, crossed the line at Michigan International Speedway in 17:46.07.

She had to wait for the second heat to be run before celebrating her MHSAA championship. In that race, Ann Arbor Pioneer freshman Rachel Forsyth took first place in 17:55.60.

Both girls have older sisters who had second-place finishes at the MHSAA Finals. Rachel DaDamio was runner-up in 2014, and Anne Forsyth was second in 2016.

Audrey DaDamio improved every year at MIS, finishing 62nd as a freshman, 11th as a sophomore and fifth as a junior.

“It’s really special,” DaDamio said. “I’ve been dreaming about crossing the line since, honestly, probably middle school, but really freshman year when I was here in the 60s. I was like, ‘How do girls run so fast?’ To have worked to put myself in this position where I’m contending for a title is something really special. I’ve had a lot of good role models on the team and in my family to help me believe in myself so I could get there. I’m really thankful to have them.”

DaDamio ran pretty much a solo race, leading by six seconds at the mile and 15 seconds at two miles. 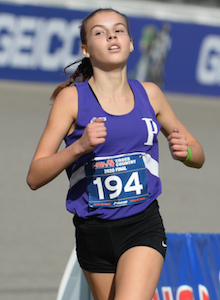 Forsyth wasn’t made aware of DaDamio’s time before she raced. She had more of a battle on her hands, outkicking Traverse City Central’s Julia Flynn (17:59.18) and Plymouth’s Lauren Kiley (18:03.92) to win her heat. An exhausted Forsyth slowed up right before the finish line.

Forsyth has a strong support system which includes her older sister.

“She helped me a lot,” Forsyth said. “Honestly, me and my sisters feel some pressure, obviously, just coming from a great family. It’s not anyone’s fault. My dad said it doesn’t matter what time you run; just go out there and do your best.”

“I’m really excited we have a state meet,” DaDamio said. “I know a lot of states don’t have that. I’m just grateful to be here. I was kind of thinking about that during the race to kind of give me an extra boost. It’s a little upsetting not to be able to race a lot of girls I know from other teams. Some of the girls in the other race, I was excited to work with to push each other.”

Forsyth, like her older sister, led Pioneer to a team championship. The Pioneers scored 129 points, with Traverse City Central taking second with 168.