Dudek was in her homeland of Poland when she was in ninth grade after two years in Florida and one year in Indiana because of her father’s job as a visiting professor of economics.

When Maciej Dudek was hired at the University of Michigan, Dudek enrolled at Ann Arbor Pioneer for her sophomore year.

From a school that has produced some of the top distance runners in Michigan history, Dudek may be the best of them all.

She won the MHSAA Lower Peninsula Division 1 championship Saturday with a time of 17:00.4, the fourth-fastest time by a girl at Michigan International Speedway.

Dudek had the fastest time in the state this year, a 16:46.9 performance on Oct. 11 in Ypsilanti, but the muddy conditions at MIS made it a tough day for chasing personal records.

“It was mostly just going for place and trying to do my best out there,” Dudek said.

“My sophomore year when I got 20th place, I thought that was amazing,” Dudek said. “I thought I could never be one of the top five runners. Now it just feels amazing to be able to do this.” 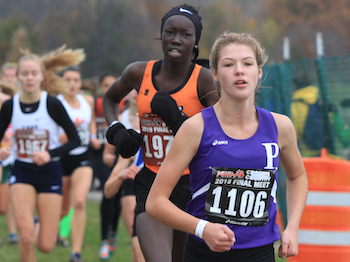 The potential successors to Dudek’s throne made their presence known Saturday, as the next five places were taken by a freshman, two sophomores and two juniors.

It was the freshman, Arianne Olson of Holland West Ottawa, who took runner-up to Dudek with a time of 17:53.0. Olson had no intention of trying to chase Dudek when runners took off from the start line.

“Not really, because I saw her times were a lot faster than mine, so I was just going to run my own race,” Olson said.

Dudek’s victory led Pioneer to its first championship since 1997 and fourth overall. The Pioneers scored 80 points to finish 33 ahead of Traverse City Central.

Pioneer had been second twice and fourth once in the last three years before ending its championship drought.

“It definitely helped a lot having people to push me in workouts and racing,” Dudek said. “It’s just amazing and helps me a lot.”