BROOKLYN — The clock was ticking on Madelyn Frens’ hopes of winning an MHSAA cross country championship in her final season at Grand Rapids Christian.

After running a blistering time of 17:56.0 on Aug. 28 at the Pete Moss Invitational at Benzie Central, Frens was sidelined with a stress reaction in her right femur.

Cross country season is short. Any time away from training and racing makes it less likely a runner will be successful come championship time.

But after going nearly four weeks without a race, Frens returned without missing a beat. With five races as a build-up for the MHSAA Lower Peninsula Division 2 Final, Frens pulled away from a five-way battle for the championship to win in 17:52.30.

The time away from running was actually beneficial for Frens. 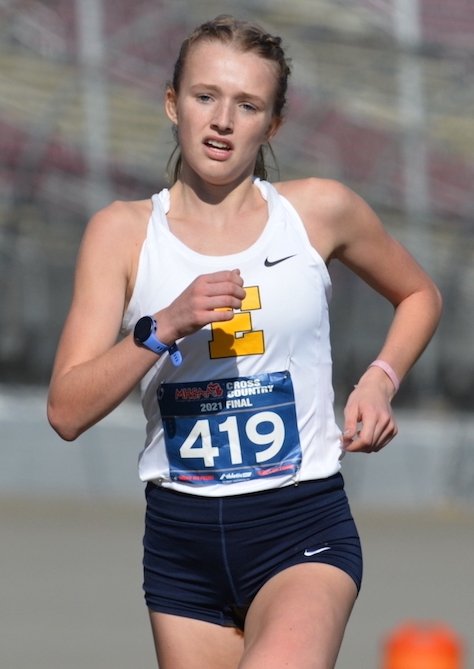 “I was able to have a lot of time just to think about myself and what running actually means to me,” she said. “It doesn’t define all of who I am.”

It was in her second race back, an Ottawa-Kent Conference White jamboree Oct. 6 that she won in 18:11.9, that Frens knew she was still on track to become a Finals champion.

Her team finished second with 99 points behind East Grand Rapids, which had 66.

Following Frens across the line were four sophomores who will likely have more battles just like this in the next two years. Early leader Mary Richmond of Frankenmuth was second in 17:56.01, Meghan Ford of Mason was third in 18:10.81, Natalie VanOtteren of Grand Rapids Christian was fourth in 18:13.46 followed by East Grand Rapids’ Muller in 18:23.28. There was a 22-second gap after that before the next wave of runners reached the line.

It was the most competitive race of the day, with five runners within three seconds of one another at the two-mile mark. Frens was fourth at the mile and third at the two mile.