Runners on the Freeland girls cross country team had no idea how good they could be a year ago, mainly because most of them were entering their first year in the program.

Two of the Falcons’ newly formed top seven – Kiera and Peyton Hansen – had just moved into the district from Ogemaw Heights. Three others – Whitney Farrell, Allyson Harvey and Mara Longenecker – were freshmen.

“Everyone was kind of new,” said Peyton Hansen, who is now entering her senior year. “My sister and I were new, and there were a lot of incoming freshmen, so it was a blank slate, and that made it easier for us all to get along and work together. That’s what kick-started us to performing very well. You’re not going to want to train and run with people every day if you don’t like them.”

The Falcons got to know each other and got to know their immense talent throughout the season, winning a Regional title and finishing 15th at the MHSAA Lower Peninsula Division 2 Finals. Now six of the top seven are back, and hopes are high for the upcoming season.

“I think it was Regionals, because we weren’t really supposed to win that, but we did and that’s when we realized we could really be good,” sophomore Mara Longenecker said. “Before then, we didn’t really realize it. I think we can definitely go to states again as a team, and hopefully place in the top 10 this year.”

As far as preseason proclamations go, Longenecker’s is fairly mild considering what she and her teammates already have done and what they bring back.

With a tough conference season ahead – Tri-Valley Conference rival Frankenmuth also qualified for the Finals a year ago and could bring back six of its top seven racers – and a region that features Frankenmuth, Corunna and Flint Powers Catholic, nothing is guaranteed. But the numbers are in their favor.

Kiera Hansen was an all-state performer, Saginaw County and Regional champion as a freshman, clocking in with a personal best of 18 minutes, 32.7 seconds. Farrell and Peyton Hansen each were sub-20 runners last year, while Harvey (20:07.9), juniors Caitlyn Mieske (21:10.8) and Longenecker (21:12.7) weren’t far behind.

Of the 14 teams that finished ahead of Freeland at the 2018 Finals, only four (champion East Grand Rapids, Petoskey, St. Johns and Cadillac) are expected to return six of their top seven runners. 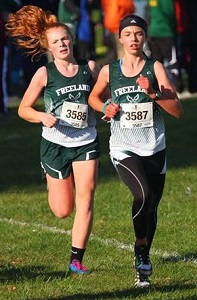 Only one other school in the top 15 (Otsego, which placed ninth with two seniors leading the way) had four freshmen in the lineup at the Finals.

“I think that we gained a lot of experience,” Farrell said. “We all didn’t run our best times at that race, but now we know the course and it can be a bit more familiar. There was a ton of people; it was really crazy.”

But modesty is something coach George Drown said runs throughout the team, whether that’s in setting individual goals, team goals or even applying to be one of the team’s captains this season.

“I don’t know if it’s that they don’t want the pressure, so they’re not expressing they know how good they are, but I do think they’re slowly understanding that,” said Drown, who is entering his third season at Freeland. “I think they’re excited for the season and excited for the new challenges we face with a different conference. We go from the team that was the darkhorse in the Regional to the team that has a target on their back.”

While the girls on the team said they didn’t see the success coming prior to last year, Drown did. His wife is the middle school coach in Freeland, giving him extra insight into the upcoming talent. And even though he’s fairly new to Freeland, he spent the previous 10 years coaching in nearby Hemlock.

“I think we did see it coming up,” Drown said. “Did we think they were going to be as good as they were their freshman year? No. But they bought in. We train to make the team good. We did a lot of group runs, and we had times with Kiera and Whitney where we knew they could run faster, but we held them back, and we used our top two girls to elevate our three through six and really pull them through the longer workouts. They bought in, and that’s how we did it. We really focused on the thought the team is only as good as the sum of its parts.”

Drown said his team is capable of stretching well beyond the top seven this season when it comes to being competitive at the varsity level, predicting he has 14 girls who are capable of running a 5K in less than 22 minutes.

So while the hopes are high and the season figures to be competitive, perhaps the modesty at the top of the lineup comes from knowing no breaks can be taken, even in practice.

“It’s really good for me, because I have people to base off of how fast I should be going,” said Longenecker, who joins Mieske as a team captain. “I’m never by myself on a run. I don’t want to say it’s a competition, but it really is at practice. You don’t want to finish last.”