If this fall marked the starting line for St. Joseph freshman Elena Figueroa, it’s sure to be an exciting finish for the budding talent as she progresses over the next three cross country seasons.

Having already claimed titles at a pair of Southwestern Michigan Athletic Conference West division meets, a victory at the Berrien County Invitational, wins in the underclassmen races at the Harper Creek Optimist Club Invitational and St. Joseph Invitational — which included times that would have placed her first and second, respectively, among the upperclassmen — and a runner-up performance at the Lakeview Invite, Figueroa leads a Bears program looking to have a strong kick as the year winds down.

“I started getting more serious last track season and started training more,” Figueroa explained. “I’ve been training since the summer, and I’ve been doing more weights and working on my strength.”

“She’s having a really solid and strong season,” veteran St. Joseph coach Mike Mahler added. “Coming into this season I knew she’d be on our varsity along with a lot of other strong runners this year, but I had no idea she’d end up being our No. 1 runner. That was a little surprising for me.”

St. Joseph competes at the Rock ‘N Run Invitational on Thursday in Dowagiac before closing out the schedule with the SMAC Championship on Oct. 23 and Lower Peninsula Division 1 Regional meet on Oct. 29 with a chance to earn spots in the Nov. 6 Finals at Michigan International Speedway. The Bears are ranked No. 14 this week in LPD1.

Along with Figueroa, seniors Riley Mullen and Jillian Tunnicliff, sophomores Grace Kelley and Cecilia Ruchti, and junior Olivia Ippel have helped fuel St. Joseph’s success this season. And though she isn’t officially part of the team, sophomore Gail Vaikutis, a transfer from Illinois who will be eligible next season, has played a critical role this year. 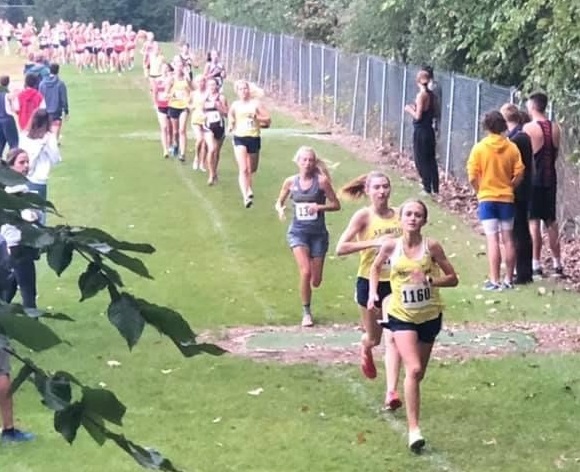 But someone had to claim that spot, and Figueroa emerged as the pace setter for the Bears, setting up what will be an exciting partnership on the course with Vaikutis in years to come.

“She’s probably faster than me, and she’s been pushing me a lot at practice,” Figueroa said of Vaikutis. “Next year you will see her. We have so much talent on this team.”

Shy and humble, Figueroa is learning to deal with the newfound attention she’s getting, as well as how to navigate larger races like the ones rapidly approaching.

“Probably the only thing we need to work on is she gets really nervous when we go to a course she hasn’t run before,” Mahler said. “We just have to make sure we have plenty of time before the race to go over the course, and just keeping those nerves under control.”

At the ultra-competitive Ottawa Hills Invite, the freshman finished fifth overall in 18 minutes, 52.34 seconds. At the prestigious Portage Invitational, and while not feeling up to par, Figueroa was 34th overall in the Division 1 race. But with multiple sub-19-minute finishes already under her belt, she’s hoping to keep up with the top half of the field come Finals time.

“It was a lot of good competition (at Portage),” Figueroa said. “It was really big. I really got to see the competition and talent that is around me and the faces that I need to try to keep up with next time.”

“It’s just a great group of kids, and I’m thrilled for Elena having a super solid season,” Mahler said. “She’s coachable, she works hard, asks a lot of questions about workouts and it is exciting. I’m just so happy for the season she’s having so far, and hopefully we’ll see more improvement over the next few weeks.”