In Randy Hunt’s mind, there was no way Richland Gull Lake’s cross country teams weren’t going to continuing their Homecoming tradition this fall – no matter how much farther they had to run.

Every year since 1993, Gull Lake’s runners have carried a game ball from their football opponent’s school to the Blue Devils’ stadium in advance of the Homecoming game. Previously, the longest trip was 72 miles from Niles.

But this fall, Gull Lake’s varsity didn’t have an opponent lined up for Homecoming until picking up Detroit Country Day – 138 miles to the east. 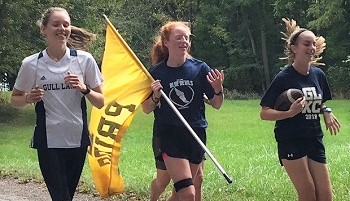 “Our runners are amazing and up to any challenge,” Gull Lake girls coach Robin Blackburn said. “We originally heard that our opponent this year was Detroit Country Day; we thought our athletic director was joking! No joke, she was serious.

“Next thought, how are we going to make this happen? We had lots of crazy ideas. My favorite was putting a treadmill on a flatbed truck and having them run. Obviously we couldn’t do that, but we knew we had to do this over two days. Once we started planning and mapping the course, everything fell into place.”

Runners filled out cards with whom, when and how far they wanted to run, and then Blackburn and Hunt, the boys coach, built the plan. The first shift left Gull Lake for Country Day at 5:30 a.m. Thursday. Makenzie Wank, Betsy Martens, Sarah Grimes, Kayla Eklund, Grace Foster and Abby Bell – running in pairs in 4-mile increments – tackled the first 35 miles west.

The next shift left from Gull Lake at 10 a.m. headed for Northfield Township, north of Ann Arbor. Joel Blackburn, Nick Dawson, Koby Fraaza, Read Knapp, Nate Krawczyk and Nate Alpers – running 5-mile increments – tackled the next 45-mile leg of the relay and even were questioned by a local police officer as to what they were up to in the middle of nowhere on dirt road.

“Usually we like the ball to be continuous, but obviously with such a distance and safety concerns, we split this one up,” Hunt said. “The kids were excited to do it, and as coaches we knew it would create an awesome memory/story.

“I think the kids liked it because it got them out of school but also for the team bonding. I was impressed with their commitment to the tradition.”

Freshmen Kristian Shyiak and Cameron Perkins took Friday’s first leg from Jackson, a 6.4 mile stretch, followed by 10 more shifts – all planned to exact distance and arrival time, while parents joined in to taxi groups to their starting points and back to the school. 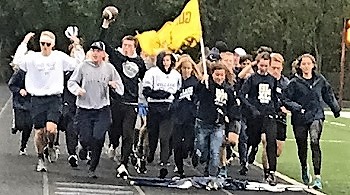 The plan was to finish with nearly a full lap at the track at 6:30 p.m., with the teams’ seniors then delivering the ball to the football officials at the 50-yard line. But with time getting short, the last group of four had to adjust, with each athlete running one mile as hard as he could to get the ball to the stadium and into the officials’ hands by 6:50 – and they made it with time to spare. “It was amazing to see the kids work so hard and do it gratefully,” Hunt said.

“Cross Country doesn’t get a lot of coverage, but this even got the community involved and following our updates on Facebook and Instagram,” Blackburn said.

“We are about being a family. We do a lot outside of practice to build our unity. This was a special moment in our family – one none of us will forget.”