The Hanover-Horton senior has returned from injury to become a two-time MHSAA Finals track champion, and she’s surged into her senior cross country season pacing among the state’s elite in that sport as well. Rector ran a personal-record 18:07.7 on Saturday to win the Class 3 race at Bath’s Bret Clements Invitational and also best the winners of the event’s two larger-school races, earning her the first Michigan Army National Guard “Performance of the Week” for 2018-19.

Saturday was the second time in four races this fall that Rector lowered her personal record, and she’s now dropped 37 seconds from her fastest finish of 2017. As a sophomore, Rector began suffering from slipping rib syndrome – one of her ribs would pop out of place, causing intense pain. She was forced to take six months off from running and missed her track & field season that spring while undergoing physical therapy. She ran again for the first time on the day of the 2017 MHSAA Track & Field Finals, built back her strength for cross country last fall and finished 10th in Lower Peninsula Division 3, and then won the 800 and 1,600-meter LPD3 track championships this spring.

Rector’s winning time at Bath bested the lineups from the top-ranked teams in both LPD1 and LPD2, plus racers from five more teams ranked among the top 10 in those divisions. She’s got big goals for the rest of this senior year. She’s aiming to run 17:30, which would break the school cross country record set by 2012 graduate Lindsey Burdette, and finish top-three at this fall’s Finals and qualify for the Foot Locker national competition. Next spring, she’ll try to repeat in the 800 and 1,600 and make a run at the 3,200 as well. With only one A- scratching an otherwise perfect academic record, Rector is carrying a 3.99 grade-point average, tied for sixth in her graduating class. She’s still figuring out where, but she’s planning to study biology and continue her running career at the collegiate level.

Coach Dean Blackledge said: “We knew we had a special athlete when she was a freshman. The only one who didn't know was Judy. It took her a while to really understand she's as good as she is. A year and a half ago she was really in the dumps, the whole thing, because she couldn't run. … (But) we worked though the difficult times for her, spent an awful lot of time together, and she got it. When she did finally get through it, she just blossomed into the runner that I always thought she was going to be. She’s just tough in training and self-discipline. When you talk about a cross country runner, the main thing more than in probably any other sport is a cross country runner has to be self-disciplined. They have to get up and run five or six or 10 miles or whatever when other kids are sleeping or whatever, and they have to do that year-round almost. She’s been that kind of athlete. When we do a workout we go out on the roads sometimes to run, and they can cut corners whenever they want and the coach would never know. I don’t think Judy has ever cut a corner. … She’s just a great leader. She has humility, and it’s tough to get an athlete as good as she is that doesn’t boast about themselves. If you want to know something about Judy, you have to talk to somebody else. She won a couple of state championships in equestrian, and I didn’t know that until 2-3 weeks ago – and I’ve been her coach, been close to her, and she’s never said a word about it.”

Performance Point: “My goal going into (Bath) was actually to try to get under 18 (minutes),” Rector said. “Last year when we ran at Bath, I didn't run very well. I was really sick, so this year I wanted to put up a good time because I knew from last year that it was a good course to run. Fortunately it was a lot cooler in the morning, a lot better running weather than we had earlier that week on Wednesday. I was like, we're going to try to maintain a 5:45 split, which would put me just under 18. I have a tendency to go faster at the beginning of my races, and I thought if I tried to even-split it more that it would be better. At the 2-mile I was at 11:35, 11:40, so I knew I was running well at that point. It was just trying to finish going into the last mile. I knew where I was at time-wise, but more than anything I kept seeing my teammates, like the last mile. There were the boys and some of the JV girls – every time I saw them, it makes it easier to keep going. Your teammates are there and they're cheering you on, and they want you to do well. That picked me up a lot for the last part of the race too.”

Comeback trail: “For me, that was a really hard thing. Before I got injured, running was something I enjoyed and I was fairly good at. But when you're supposed to be going to rehab and doing all of those things, you really have to put yourself into it 110 percent. When they ask you to do things like the exercises and stuff, I was like, This is crazy. No way.’ They're like, it will help you. ... Having goals helped me because I'm a really goal-driven person. So coming out of that and not being able to run, I knew I valued it a lot more, just being able to go outside and being able to run and having the ability to do that because some people don't even have that. Having it in my head that I didn't want to take anything else for granted – every time I did a workout or went out to run, it was the best effort that I could do.” 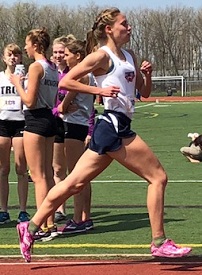 Finding form: “Last summer was just trying to build up to where I was in the high 18s. This (spring’s) track season was huge for me and getting me the confidence that I could be running faster, not just short distance things but cross country too. Over the past year I've worked a lot on my form and a lot more on basic strength, the little things that I didn't necessarily do before. So I feel a lot more smooth when I'm running.”

Back on track: “After taking all of that time off, I started running on the day of the (track) state meet a year ago – so it would've been a full year from not being able to run to starting running, to the day I won those two championships. It was really emotional. I never would've imagined being able to do all of that in a year. ... It had always been a goal I had to maybe run and win a state championship, but that I was able to do it, in that amount of time, I was just so happy and proud.”

Future path: “(I’d like to become) a pathologist, someone who researches and studies diseases. I really like science classes. Last year I took a microbiology class that was more based on studying diseases, and we took samples of things from around our school and looked at them and ran tests on them, and I thought was super cool. If I could do something like that or in the medical field, that's a long-term goal for me.”

PHOTOS: (Top) Hanover-Horton's Judy Rector leads the way during a race this fall. (Middle) Rector powers down the straight-away during the Track Finals this spring. (Photos by Joe Childs and Marlissa Shepherd, respectively.)