Among the most intriguing stories from the first month of cross country season is the significant improvement of Farrell, who finished 92nd as a sophomore and 97th last season at the Lower Peninsula Division 1 Cross Country Finals. On Friday, Farrell won the Spartan Invitational “Elite” race at Michigan State University with a time of 17:33 – 2½ minutes faster than her time at the event last year and nearly two minutes faster than her 2015 Finals time – to earn the Michigan National Guard “Performance of the Week.”

Farrell finished two seconds faster at MSU than Traverse City Central’s Sielle Kearney, who took fourth in LP Division 1 a year ago and who along with Hart’s Adelyn Ackley was in heavy pursuit until Farrell crossed the line first. Lakeview, which didn't make the Finals last season as a team, finished second at MSU to only Northville, which was fourth in Division 1 in 2015. Farrell has won all of her races this fall, opening this season by breaking Lakeview’s 5K record by 51 seconds with a time of 17:39. The 17:33 at MSU is her personal record; her fastest time just a year ago was 18:58. Farrell's cross country accomplishments are a continuation of a strong spring, when she set school records in track in the 1,600 (4:29.23) and 3,200 (10:57.37), placing sixth at the LP Division 1 Final in the former. She also was part of school record in the 3,200 relay.

A two-time captain of the cross country team and captain for track & field during the spring, Farrell excels in the classroom as well with a weighted grade-point average of 4.19. She serves as president of her school’s National Honor Society chapter and as her class’ vice president. She hopes to continue running for a Division I college program but is unsure where she'll attend; she's passionate about animals and loves cooking and baking, and is considering studying either animal or food science.

Coach Becky Pryor said: “Maggie is the type of runner who not only does what is asked of her, but what her body needs. In addition to running almost every day, Maggie also makes sure to take care of her body; she rolls out almost daily, adds in extra core and stretching and takes ice baths weekly. … You cannot have a better athlete on your team than Maggie; she truly loves to run and compete with her team. She has individual goals, but she also has big team goals. She views her team as her extended family, and when the team does well that is when she is most excited. She is always positive and excited to be with her team. Whatever she can do to support her team, she does.”

Performance Point: “That invite was really huge for me because this season has been kind of a breakout season for me,” Farrell said. “At least in cross country, I haven’t been able to compete with some of the best girls in the state. (And) that race was just huge for me to gain confidence, learn, and feel what it’s like to use racing strategies against the best girls in Michigan. Just figuring out how to race will be huge toward my state and end goals. That was one big thing, and it was really fun to be out there for me and see all the support I had, everything like that. It was a great experience.”

Building a champion: “My coach changed my training plan last indoor track season. That’s when I got serious about wanting to be one of the faster runners in the state and getting into a college of my choice for running. I adapted to a different training schedule, put a lot of time into it and did a lot of strengthening and core as well. I make sure I’m not too hard on myself, but I’m disciplined. I do core when I need to do core; I make sure to stretch because it’s best for me. … And our team is really pushing me because we’ve got a lot of good girls this year, and that’s helped a lot.”

No fluke: “I dropped a lot of time in track, but I wasn’t expecting to break 18 (minutes) my first (cross country) race. At first I thought it was a fluke thing; yeah, I’m really excited, but it’s going to die down. So yeah, I really surprised myself. I knew I’d be better, but (didn't know) to what extent. … I’m a lot more mentally confident. Last year I tended to fold under pressure; I wasn’t really in it mentally, and there was a lot of doubt. I guess you could say now I believe in myself.” 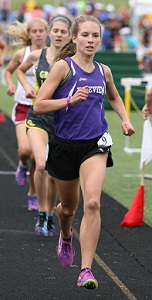 Joining the elite: “This past year, I knew I had the potential to improve a lot. But if you’d asked me last cross country season, it was my dream to just stay in the 18:50s. When I’d hear people ran in the 17s, I just looked at them like super heroes; that seemed physically impossible to me. It’s crazy to comprehend, to sit down and think about it. I’ve always looked up to the Michigan girls who are really fast. I go to a lot of indoor meets and I see how dedicated they are. Last year I looked up to them, I idolized them, and it was hard to think that (I) could’ve been there last year. Madison Troy (Grandville) … Rachel Bonner (Port Huron), Maddy Trevisan (Farmington), I just remember watching them and knowing what they had to do to get there and how dedicated they are and being really inspired – and hoping to one day be running next to them.”

Listen to Dad: “Every Sunday I go on my long run with my dad (Patrick Farrell). He’s big on form, and he shares with me a lot of wisdom on what my form is doing. He also tells me a lot about making sure I enjoy running, making sure I don’t drive myself crazy with it. He’s someone who wasn’t able to finish his high school season because of injuries, and he wants to make sure I embrace every race so if it comes to a point where something happens, I won’t be disappointed in myself. It’s just really great to be able to run with him. It reinforces what I love about running.”

PHOTOS: (Top) Maggie Farrell approaches the finish at the lead of the Elite race at the Spartan Invitational on Sept. 16. (Middle) Farrell moves toward the front of the pack during the 1,600 at this spring's Lower Peninsula Division 1 Finals. (Top photo by RunMichigan.com/John Brabbs, middle by RunMichigan.com/Carter Sherline.)