After missing out on winning her first Finals championship last fall by less than a second, Theis is undefeated at the 5K distance this fall. On Friday, she outpaced the toughest field the state has seen this season to date – running a personal record 16:59 to win the Spartan Invitational “elite” race at Michigan State University and earn the Michigan Army National Guard “Performance of the Week.”

Theis crossed the line first ahead of Hart junior Adelyn Ackley, who edged her to win last year’s Lower Peninsula Division 3 race at Michigan International Speedway. Also in the “elite” field were reigning LP Division 1 runner-up Anne Forsyth of Ann Arbor Pioneer, reigning LP Division 2 runner-up Anna Fischer of St. Joseph and a combined nine others who finished among the top 10 in either LP Division 1, 3 or 4 including sophomore sister Jaden. Lansing Catholic, which moved to LP Division 2 this season after finishing runner-up last year at MIS in Division 3, came in fourth at MSU on Friday behind two Division 1 teams and Hart.

Olivia did get her first Finals championships last school year, winning the 1,600 and 3,200 meters at the LP Division 3 Track & Field meet. Her 16:59 on Friday made her one of four girls who have broken 17 minutes this fall (Forysth, Ackley, and Traverse City Central’s Sielle Kearney – who came in fifth at the Spartan – are the others) after no one broke 17 in 2016. Theis is exploring her college options and carries a 4.0 grade-point average, with interests in becoming an occupational or physical therapist. Lansing Catholic is ranked No. 2 in LP Division 2 this week and seeking its first team MHSAA Finals championship in girls cross country to go with last year’s runner-up finish and another from 2000.

Coach Tim Simpson said: “She has the talent and then adds in a desire to work as hard as she has to. We are lucky because we have a few girls who will do whatever it takes. Olivia is tireless in her work and very conscientious about it. I literally have to reign in her training. The fact that she ran track has now given her well over a year of continuous training for running; she has stayed injury free as well. In that year of running she has earned her way onto big stages like the FootLocker Nationals and New Balance Track Nationals. In those meets she has done extremely well and pushed her times to new heights as well as her confidence in her abilities. Track season showed everyone including her just how talented she was, and it wasn't just cross country. She has broken records of many of the best runners ever from Michigan and even though she doesn't pay a lot of attention to that, she knows what it means. But she takes everything seriously, never overlooks anyone and is diligent about being prepared.”

Performance Point: “I know that the original plan was to go out and stay with the lead pack, and that’s what Jaden and I did, essentially,” Theis said. “Not even halfway in, a girl started breaking away, so I was like, I’ll go with her. And eventually I just ended up being able to break away from her – Adelyn Ackley, she beat me at states last year. I didn’t want her to be close enough to me where she could out-sprint me again. So I just wanted to keep going, and eventually I realized I could break 17. I had no idea what time I was going to be at, and then in the straightaway I saw it and was like, ‘Oh, I can do this.’ It’s definitely a huge accomplishment. I was definitely hoping to do that at MSU. I knew the competition would be really good, but I had no idea how I’d be feeling. I felt really good, and I’m really happy I took advantage of that level of competition. “ 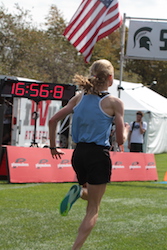 Speedy sisters: “It’s really nice, because I can train with (Jaden) at home. It’s someone to push me. A lot of times you don’t want your sibling beating you, especially when she’s younger than you, so it’s pretty motivational. Sometimes it’s hard because we’re siblings, but sometimes we just have to use each other as competition. It’s great. I love having her on the team. I think (eventually) she’ll beat me easily. She already almost beat my (personal record) from last year; she’s a sophomore. I want her to beat all my times, and I think she can do it.”

Born to run: “I like how it makes me feel, and I like how it’s hard. I like challenging myself.  I like knowing the people I’m racing, because I know I can talk to them afterward and be like ‘good job’ no matter what happens. I think running has allowed me to get to know a lot more people.”

Also born to help: The human body interests me, and I want to help people. (Occupational therapists) help you get back from injury, back into normal life, from illness back into real life, so I think it would be really cool to be able to help people do that.”

PHOTOS: (Top) Lansing Catholic's Olivia Theis pushes toward the finish line during Friday's Spartan Invitational "elite" race. (Middle) Theis comes down the stretch with the clock telling her how close she is to breaking 17 minutes. (Click for more from RunMichigan.com.)