Today, you’ll find her seated behind a desk in Denver. A CPA and the mother of three, including a former Olympic speed skater, Beth Jurgensmeyer still runs. The MHSAA’s first girls individual cross country champion, she was introduced to the sport as an 8-year old.

The daughter of Reverend Robert O. Huff, a Lutheran minister, and his wife Jane, she was born in Indianapolis. The fifth of six children and the couple’s first daughter, she and the family moved to Midland when Beth was a baby.

“I had a kidney infection,” said Jurgensmeyer, “and a doctor had told us that running would help clear it up. Now I don’t know if that was true, but I started running for Fleet Feet in Midland. It was fun.”

Still going strong today, Fleet Feet was formed in 1967. A track and field and cross country program, it was designed with the goal of keeping kids active. The club competed in AAU competitions, and Huff excelled.

A friend and fellow runner from Fleet Feet introduced her to speed skating.

“Cindy Kressler invited me to skate with her family in the park in Midland. Her brother, Craig, was a pretty good speed skater and ended up an Olympian in 1980. So, I did that in the winter.”

Huff excelled in that sport as well, skating for the Midland Speed Skating Club and earning “Pony Girl“, “Midget” and “Junior” recognition at Michigan Skating Association-sponsored events across the state, and at other races around the Midwest.

“My brothers were all older than me, and they all played sports,” she added. “Football, basketball, baseball, hockey. So I competed too.” 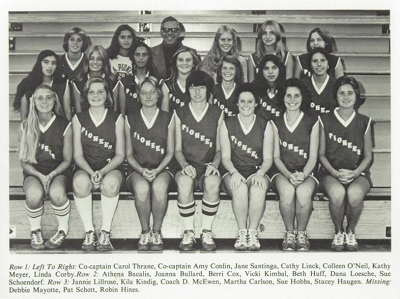 But in sixth grade Huff’s family moved. Pastor Huff had received a call to a church in Ann Arbor. It was his fourth assignment.

“There, I continued to skate, now with the Wolverine Club (based out of Detroit). I ran with the Michigamme Club, and we were coached by (Kenneth) ‘Red’ Simmons.”

Born in 1910, Simmons was a football and track star at Redford High School in Detroit, then at Michigan Normal College (now Eastern Michigan University) before serving 25 years with the Detroit Police Department. Upon retirement Simmons, along with his wife, formed “The Michigammes,” a women’s track club designed to allow girls to compete. In 1976, he was named the first coach in the history of women’s track and field at the University of Michigan.

Huff never missed a beat, winning more than a dozen state age group championships between 1973 and 1976.

“I attended Slauson,” she continued. “That fed into Ann Arbor Pioneer. Back then, it was the only high school in Ann Arbor that had 9th grade. I liked that. You go there you’re the little kid, running with the older ones, trying to keep up. You’re able to keep a low key. I wasn’t very big, and the uniform was sliding down my shoulders. My Mom took it to a seamstress and had mine altered so it would fit.

“My parents never pressured me. My participation was never assumed. Each year, my Dad would ask me a question, ‘Beth, do you want to run again?’ I did - I loved to run. I’d sleep in my shorts and shirt, wake up in the morning, slip on my shoes and run before class. Because of Fleet Feet and The Michigammes, I’d run hundreds and hundreds of races before I got to high school. I knew I was pretty good, but I always liked to be kind of unknown.”

Flying under the radar didn’t last long.  By season’s end, Huff, along with sophomore Dana Loesche, had emerged as the team’s top runners.
“After my freshman year, people suggested I run between cross country and track seasons,” Jurgensmeyer recalled.  “I told them, ‘I skate in the winter.’”

Now coached by Scott Hubbard, Huff was Pioneer’s top runner as a sophomore and led the cross country team through a stellar year.

Hubbard had run in high school for Ann Arbor Huron and later at Eastern Michigan University. Many today know Hubbard as the longtime voice of the Detroit Marathon. “Beth was very, very good. She was just average size, but she was whippet fast,” he said. “(But) at the state level, cross country for girls was not a sport sponsored by the MHSAA in 1977.” 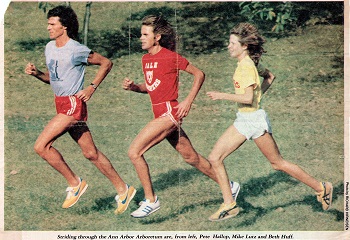 Yet since 1975, an unsanctioned state championship was hosted in Michigan. In both 1975 and 1976, the event was held at Ann Arbor Pioneer. The 1977 event was run at Potterville High School in November. A total of 370 runners from 105 schools competed in the meet, a substantial increase from the 243 runners that had participated a year previous. Miriam Boyd of Port Huron, one of Michigan’s all-time great prep distance runners, finished with the top individual time, followed by Carol Schenk of Flint Kearsley and sophomore Huff. Crosstown rival Ann Arbor Huron ended the day with the team honor, while Pioneer finished third in Class A.

“It was different then,” said Jurgensmeyer, laughing. “My Mom would make me a peanut butter and jelly sandwich. On race days there would be two oranges and a Hershey bar. Now, they’d tell you that all that sugar would not be the best thing for you. After a race, you’d go to the car, grab a clean shirt, go to the awards ceremony and go home. My Dad, he couldn’t really watch many races. Saturday’s were busy, as he had weddings or prepared for Sunday. Sometimes, when I would run, he’d be there standing with four or five others from church, as they prepared to go to a meeting. He couldn’t stay the whole race, and that was OK.”

“While in Ann Arbor I met a man, John McCravey, who was in medical training at the University of Michigan,” Jurgensmeyer remembered. “He was one of the people who really wasn’t afraid to offer something other than praise. ‘Beth, your arm swing is awful!’ It was nice to hear criticism. I could get better.”

“I had come to U of M for a one-year residency. I had run at Dartmouth, and coached while going to med school in Memphis. In Ann Arbor, I worked with Elmo Morales, the founder of the Ann Arbor Track Club. We started age group cross country. The running boom was on, and Ann Arbor was a hotbed. Beth was older than many of the pupils in the program, and clearly a lot better than most at that point. We became running pals. (Because of) the skating, she had great endurance.”

The pair logged hours in the streets of Ann Arbor, including time during the brutal winter of 1977-78. 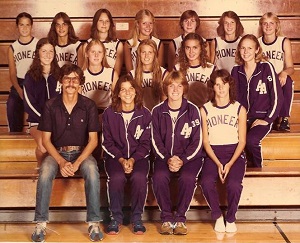 “We talked the whole time. As a coach, it’s great when you can run with a student. You can see what they’re doing, feel the biomechanics, and offer advice. ”

In Class A in the spring of 1978, Huff finished second to Boyd in the two-mile at the MHSAA’s sixth annual Girls Track and Field Meet. In the fall, Huff, now a junior, earned Michigan’s first Lower Peninsula Open Class cross country individual championship.

Seven months later, Huff would win the two-mile in track. Only, it wouldn’t be in Michigan.

In December 1979, the Huff family left Ann Arbor for Janesville, Wisconsin, as her father accepted a new assignment.

At Craig High School, Huff again joined the cross country and track teams and quickly emerged as their top runner. Her 10:53.19 time at the Division 1 Wisconsin Interscholastic Athletic Association championship meet set a new state mark. During her senior year in Wisconsin, a case of mononucleosis and a stress fracture set her back, and impacted her running seasons.

Her next move was on to college, where she ran for the University of Tennessee. There, she competed in the 10,000 meters. After college, she married, had kids, and stopped running competitively. After returning to Midland, she resumed speed skating, and introduced her kids to the sports she loved. She coached them as far as she could.

Jurgensmeyer’s son, Ryan Bedford, excelled in cross country at Midland High School before hanging up the shoes to focus on speed skating. He was a 2009 world champion and a member of the 2010 Olympic team. Daughter Kristin also excelled as a runner and speed skater. Beth’s oldest son stayed with the more traditional sports of football and basketball.

Reflecting back on her years as an athlete and as a coach, she added, “Today, parents are overly involved. It’s so high-pressure so early that kids become miserable. Research shows if you start specializing kids too young in one sport, they will be done by age 18. I always wanted my kids to try all sorts of sports and not just specialize. Just let kids fall. Let them get dirty.”

“Really, women’s sports are the best thing to ever happen to sports,” said Hubbard, remembering the long haul involved in opening up those opportunities to the girls. “I was so fortunate to be witness to that. The world is really much richer because of it.”

PHOTOS: (Top) Ann Arbor Pioneer's Beth Huff, right, runs just ahead of South Lyon's Cheryl Scheffler during the Ann Arbor Greenhills Invitational in 1978. (Middle top) Huff, second row and third from right, was a freshman on the 1976 near-undefeated Pioneer cross country team that lost only to Livonia Stevenson. (Middle below) In this clip from the Detroit Free Press' Sunday magazine, Huff is shown running in Ann Arbor with Pete Hallop, far left, and Mike Lutz, who went on to play bass for rock group Brownsville Station. (Below) Huff, top row second from right, starred as well for Pioneer's 1979 cross country team, winning the first MHSAA individual championship in the sport. (Photos courtesy of Beth Huff.)