Of 30 runners who finished among the top 10 in an Upper Peninsula Girls Cross Country Final last season, 18 will be returning for another championship opportunity Saturday at Pictured Rocks Golf Club in Munising.

And if that’s not sign enough that the competition will be high caliber, consider this – the two reigning champions returning will face off in the first race.

This year’s Finals kick off with the Division 3 girls, and it’s hard to imagine a better opener for reasons discussed more below – including what could be the day’s strongest individual and team competitions for either the girls or boys.

Races begin at 11 a.m. and finish with the Division 1 boys at 1:30 p.m. Check back Saturday evening for coverage of all six Upper Peninsula Finals, and see below for more teams and individuals to watch.

This season’s Sault Ste. Marie team lines up much differently from the one that claimed the program’s first MHSAA title a year ago – when all six runners finished among the top 13. But sophomore Shelby Eavou is back after finishing ninth and sophomore Nicky Kucharczyk joins her after coming in 12th, and two freshmen have entered the mix with Haleigh Knowles topping the team with a seventh-place at the prestigious El Harger Invitational in September. Knowles and her teammates will have to fend off a Marquette team that returns only two of seven from last year’s Final but is led by sophomore Ericka Asmus, who finished 10th and won the Great Northern Conference meet last week. Negaunee is paced by its top three from last year’s team that finished sixth, including sophomore Emily Paupore and senior Clara Johnson – who came in third and fourth, respectively, among individual placers.

Other individuals: In addition to the five from last season’s top 10 who will return this weekend, Escanaba freshman Nicole Kamin could be one to watch Saturday and for the next three Finals after she finished second to Asmus at the GNC finale. Calumet freshman Clarity Gipp also should be in the mix over these next four Finals; she finished second at the Western Peninsula Athletic Conference meet and won one of the league jamborees this fall.

St. Ignace is fresh of a sweep of Eastern Upper Peninsula Conference jamborees and is predicted to break Ishpeming’s three-year hold on the Division 2 title. The Saints finished fourth last season and return only two of five runners from that race, but they placed the top four runners at that final EUP jamboree as freshman Hallie Marshall led the way. The Hematites won last year in part on the strength of depth with all seven runners placing between ninth and 20th. Five of those seven are back, led by senior Kayla Kaukola and junior Brooke Johnson, who led the way in 2016 coming in ninth and 10th, respectively. Hancock returns its top five and six of its seven runners from last season’s third-place finish, with sophomore Mackenna Nuttall looking to break into the top 10 after coming in 11th a year ago. 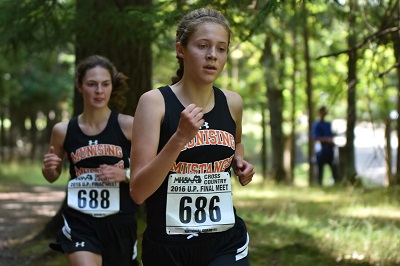 Individuals: With Munising and its champion and runner-up from last year’s race moving to Division 3 this season, only four of the 2016 top 10 are back. Finishing ahead of Kaukola and Johnson last year were Ironwood’s Emily Carey in fifth and Iron River West Iron County’s Taylor Clark in seventh; both are juniors this season.

Cedarville ended Chassell’s two-year winning streak last season, edging the Panthers by 12 points. But Chassell has stormed back this fall and is led by five runners from last year’s lineup including reigning UPD3 champion Lela Rautiola, now a junior, and freshman Gwen Kangas, who came in ninth last year as an eighth-grader. Munising will certainly provide a challenge after finishing second in UPD2 last year. The Mustangs have five of last year’s seven runners in the lineup for this weekend, led by last season’s UPD2 individual champion, senior Alyssa Webber, and runner-up now-junior Madeleine Peramaki. Those two and Rautiola finished within six seconds of each other at the El Harger Invitational, Peramaki the fastest of the three. Cedarville does return three runners who placed among the top 10 and four of its seven total from last year, and could sneak into contention despite being an honorable mention in the latest UPD3 ranking.

Individuals: Webber’s 19:59 last year would’ve won the race by 13 seconds, and Peramaki would’ve placed fourth individually. Cedarville adds junior Caroline Freel, sophomore Lily Freel and freshman Cassidy Barr into the mix after they crossed sixth, eighth and 10th in UPD3, respectively, last season. Rock Mid-Peninsula sophomore Daisy Englund is back after finishing seventh, and Eben Junction Superior Central sophomore Danika Walters will look to move up after finishing fourth. And as mentioned, Rautiola is the reigning champ and Kangas was ninth – making it nine runners total competing in this race who were top-10 in one of the Finals last season.