BROOKLYN – Ava Strenge and Bailley McConnell both got what they came for Saturday.

McConnell was second in 18:55.6, leading a dominant Sacred Heart team that had six all-state runners and a seventh who missed by one place.

The Irish broke the Division 4 record of 52 points they scored last year by scoring 34, beating runner-up Pewamo-Westphalia by 82. Sacred Heart’s total ranks sixth all-time in any division and is the lowest since Rockford won Class A with 25 points in 1998.

“It’s awesome,” said McConnell, a junior. “It’s good to be a team and work together, cheer each other on and be really close to each other. Sometimes we get to run with each other during the race.

“We were hoping to make another record. We’ve had some injuries and sicknesses, so we were just hoping to maintain that.”

There have been some great sister acts in MHSAA cross country history, but nothing like the McConnells.

“I went out with my sisters,” Bailley said. “They like to pace me a lot and I like to pace with them, so we just kind of stayed back. Each mile, we’d see the time and I’d push harder so I could keep a constant pace.” 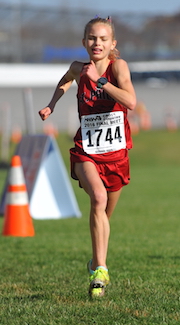 Strenge was the Division 4 champion two years ago. She led most of last year’s race before being run down by Tessa Fornari of Waterford Our Lady of the Lakes.

“It was kind of a shock to me,” Strenge said. “I was disappointed, but I still had next year.”

Strenge was determined not to be caught again, charging to the front and pushing a hard pace. The way she pumped her arms was more in line with a middle-distance runner on the track than a cross country runner.

“I like to get out in front of the pack,” Strenge said. “Our start was way in the far corner. I wanted to get in the front as soon as possible. I’m not really a good sprinter, so I wanted a lead before they could pass me on the straightaway.”