MUNISING — It was a historic day for Sault Ste. Marie’s cross country program Saturday as its girls team completed a sweep of the Upper Peninsula Division 1 titles 90 minutes after the boys started the championship run at Pictured Rocks Golf Course.

The Sault girls, placing three in the top 10 individuals, used their depth to win for the second time in three years with 56 points. Last year’s champion Marquette edged Houghton on a tie-breaker for runner-up honors as both teams scored 66 points.

“This is one for the record books,” said Sault coach Jim Martin. “This is the first time we won both in the same year.

“We had six girls who were hurt at some point of the season, but they kept getting better. We have a great coaching staff and new AD (athletic director) who’s doing an excellent job. This is a great day for our program.” 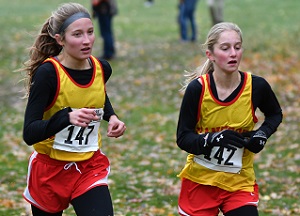 “My original plan was to run this in about 18:40, but once we got here I kind of knew that wasn’t going to happen,” she said. “I was really excited to run. The weather didn’t really bother me. Once I got up the (last) hill, I saw my time and decided I wanted to go under 20.

“My dad and mom are always there to support me, and today my whole family was here to cheer me on.”

Hancock grabbed six of the top 12 spots to gain its first D-2 championship in five years with 26 points.

The Bulldogs were followed by 2017 champion St. Ignace with 62 and Munising at 79.

“The tightness among our girls was huge,” said Hancock coach Matt Dennis. “We were pack runners all year, and it was just a question of how close to the front we would be.

"The teams were very competitive in our area. We had great competition from Houghton and Chassell all year, which only made us better.”

"I took a little more conservative approach today and tried to keep up with the Chassell girl (Rautiola),” said Walters. “I put on a surge at the mile mark and kept that pace.

“It basically feels great to be a U.P. champion, although it hasn’t quite set in yet. I took third at Norway last week, and I think it motivated me.”

Chassell, which grabbed five of the top eight places, retained its title with 25 points. The Panthers were followed by Cedarville with 84 and Mid-Pen with 95.

“Many of our girls have been running together for five years,” said Chassell coach Marco Guidotti. “This is a real cohesive unit. Our leadership is really infectious.”