TRAVERSE CITY – “Begin with the end in mind.”

Those words were at the heart of Julie Duffing’s preseason message to her Traverse City St. Francis cross country teams last month.

“It’s something we always talk about,” Duffing said. “We’re not really concerned about what’s going on right now. These meets give us an idea, but it’s the end of October and early November that we’re concerned about. We say, ‘Keep the end in mind. Where do we want to end November 4th?’”

The girls ended right where they wanted last November, successfully defending their MHSAA Lower Peninsula Division 3 title. They did it by turning a one-point loss to Lansing Catholic at the Portage Invitational into an 11-point win over the Cougars a month later at the Finals meet.

“They knew what had to be done,” Duffing said.

Well, the challenge might be even greater this fall, even though Lansing Catholic moved up to Division 2.

“They left, but now we have Hart,” Duffing said.

Hart, which finished seventh a year ago, stamped itself as the team to beat with a dominating performance at the season-opening Benzie Invitational. The Pirates won the large school division, topping Division 1 Traverse City Central by five points, 73-78. Benzie Central, which was third in Division 3 a year ago, was sixth with 165 and St. Francis seventh with 170.

To no surprise, Hart, led by individual Division 3 Final champion Adelyn Ackley, is ranked No. 1 in the first coaches poll. St. Francis and Benzie Central are tied at No. 2.

“But,“ he cautioned, “you can never tell. I think last year Hart was ranked fourth coming in (last year) and finished seventh.”

Kelly and Duffing, however, are of the same belief. They can’t worry about Hart. All they can control is how much their respective teams improve.

“We have a lot of work to do,” Duffing said. “We are coming along slowly, which is OK. We did last year, too. Our girls tend to come together for the bigger meets at the end of the season.”

The Gladiators, who run at Michigan State in the Spartan Invitational today, return five of their top six finishers from last year’s MHSAA Finals meet. Tarsa’s been the lead runner. She won the Buckley Invitational last Saturday with a time that was 42 seconds faster than a year ago on that course. 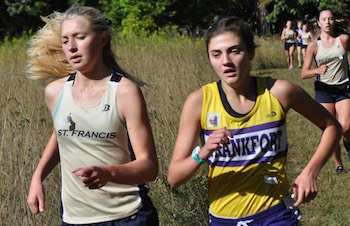 Katelyn Duffing gives the Gladiators a potent one-two punch when healthy. Her times have been slower than last year when she placed 11th at the Final. But the 16-year-old junior is also coming off mononucleosis.

“I feel 100 percent,” she said. “I feel a lot stronger. Maybe not quite (as strong) as in the past, but I’m working towards it. I still have time to improve.”

“If she comes back to form,” Kelly said, “they’re a whole different team.”

One runner who is making strides is junior Christine Scerbak, the No. 3 runner. She improved by 23 seconds at Benzie.

“She’s coming on,” Katelyn Duffing said. “She’s working hard and really pushing herself. She wants it. You can tell.”

“And that’s good because we need her up there,” Tarsa added.

Sophomore Libby Gorman, who was 35th at last year’s Finals meet, improved her times significantly at Benzie and Buckley, too.

After winning MHSAA titles the last two years, the Gladiators are not lowering their expectations.

“We definitely have high goals,” Tarsa said. “We want to make it back and do really well. But we need to stay healthy. That’s one of my main worries.”

Julie Duffing is not thinking that far ahead yet.

“I go into every season hoping we do our best,” she said. “I’m not one to say we’re going to win it. That’s not how I coach. I go into it with the forethought that we have to work hard every day to get better.

“The girls set their goals at the beginning of the season and they said they would like to repeat. We (coaches) didn’t say anything about it. They know what they want to do, and we’re going to guide them.

“Hart is tough and you can’t count Benzie out. They’re tough, too. We’ll have to get tougher as the season goes on. But we’ll be ready.”

Kelly expects Benzie to be ready, too. The Huskies are led by two all-staters in Karpukhno and Pallin, who were 20th and 24th at last year’s Finals. Paige Johnston and Mary Claire Smeltzer are back and give Benzie a solid top four. Kelly’s mission was to find a No. 5.

And senior Hadley O’Connor, a first-year runner, is emerging as that candidate. She was fourth overall in the first Northwest Conference jamboree.

“She played volleyball three years and is a sprinter on the track team,” Kelly said. “She came to a summer running event, and four miles in she was still running with the top girls.

“I said, ‘Do you even know what you’re doing right now?’ She said, ‘I’m just running.’ I said, ‘You’re running with all-state girls, and you’re keeping up with them.’

“I thought she still was going to play volleyball, but the night before she called and said she was going to run cross. For her to show up was great news for us.”

Kelly, who coaches with his wife Tracie, said this could be one of Benzie’s best teams.

“Theoretically, it could be one of our top two or three fastest teams in school history, and we’ll probably be a longshot to win it,” he said. “Hart is that stacked.

PHOTOS: (Top) Benzie Central’s Sierra Pallin (7) and Lucy Karpukhno, (6) and Traverse City St. Francis’ Katelyn Duffing (222) all are back pacing top-ranked teams this season after running against each other at last year’s Regional. (Middle) St. Francis’ Joyana Tarsa, left, has been the fastest on her team this fall. (Below) Karpukhno’s best time also ranks among the top 10 in LP Division 3 this season. (Photos courtesy of the Traverse City St. Francis and Benzie Central girls cross country programs.)