Oxford Hills Country Club hosted the 1980 Lower Peninsula Class B Cross Country Finals on what had to be a chilly day, considering the heavy coats and winter gloves worn by spectators in the photos above and below taken during the races that day.

A little cool in the air isn’t unusual for this annual championship event. But there was a little change in the air as well on this day, as it was the first MHSAA Finals ran at the current race length of five kilometers (3.1 miles). 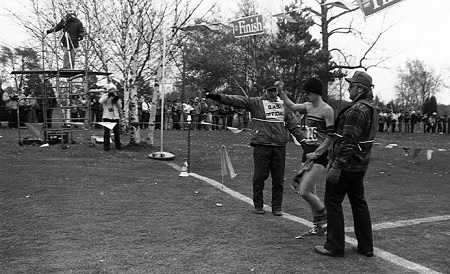 There were plenty of differences too from the meets that will take place this season Oct. 24 in the Upper Peninsula and Nov. 7 in the Lower Peninsula.

From 1961-96 for the boys and 1979-96 for the girls (girls cross country at the MHSAA tournament level began with just one open class Final in 1978), MHSAA individual championships were awarded separately to the first-place finishers among both team and individual qualifiers. Also, while all three 1980 Upper Peninsula Finals were run at Gladstone, the four Lower Peninsula Finals were run at multiple sites, one class at each.