Jaylee Brown, a 2012 graduate of Onekama and current member of the Northern Michigan University cross country and track and field teams, recently received a Student-Athlete Sportsmanship Award from the NCAA Committee on Sportsmanship and Ethical Conduct.

Brown encountered a runner sitting on the course near the end of a 2013 race at the University of Minnesota. While others passed by, Brown hoisted the runner and helped her through the finish line.

Brown ran for the Bear Lake/Onekama co-op cross country team from 2008-11, placing among the top 57 at the Lower Peninsula Division 4 Final all four seasons including placing 24th as a sophomore and 27th as a freshman. She also was a four-time top-six placer in LP Division 4 in pole vault, winning the championship as a senior.

The following explanation of Brown’s selfless act is courtesy of the NCAA website:

While running in the Roy Griak Invitational hosted by Minnesota last Sept. 28, Brown reached the top of the final hill of the cross country race when she noticed a runner sitting on the course. 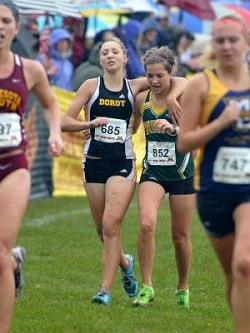 It was Lillie Koerner of Dordt College, who had fallen and appeared dazed. Many runners ran past Koerner on their way to the finish, but Brown stopped.

Brown put Koerner’s arm around her shoulder and told her they would finish the race together. After they crossed the finish line, Brown escorted Koerner to the athletic training tent, where she could receive medical treatment.

“It was the right thing to do,” Brown said. “For her to come all that way and not be able to finish really would have broken my heart because I know how hard it is.”

“I felt like it was my job to help her,” Brown added. “I would hate for that to happen to me. I know I would want someone to help me.”