Holly Bullough made the switch from soccer, Anthony Berry from football.

Today, the two Traverse City seniors are among the best high school runners in the state.

Bullough, a four-time MHSAA champion in track at St. Francis, enters the cross country season as the defending Lower Peninsula Division 3 champion. The Michigan State University commit rallied from nearly 75 yards back to edge Charlevoix's Amber Way by two-tenths of a second in a spectacular finish in last year's Final.

Traverse City Central's Berry finished third in the LP Division 1 boys race. His time of 15:21 was the fastest among all the underclassmen in the state.

Now the two will try to build on their past success, starting Saturday in a season-opening invitational at Benzie Central.

"Anthony Berry and Holly Bullough are the two best distance runners to ever come out of here," Central Hall of Fame coach John Lober said matter-of-factly.

That's a strong statement, considering the area has produced some talented runners, including Central Lake's Ryan Shay, a former All-American at Notre Dame and the NCAA 10,000-meter champion in 2001. Shay was a four-time high school MHSAA champion in cross country. His best time in an MHSAA Final was 15:30.

"Ryan had a great career," Lober said. "But as far as high school runners, Anthony is running faster times than anybody ever has in this part of the state. It's really cool as a coach to see a kid apply himself like that."

And it doesn't end there. A third Traverse City runner, Central sophomore Sielle Kearney, is taking her place among the elite. Kearney finished fifth in last year's Division 1 meet in a 17:57.7. That was the second fastest time by a freshman and it earned her a spot - along with Berry and Bullough - on the Michigan Interscholastic Track Coaches Association all-state Dream Team. In the spring, Kearney broke Central's school record in the 3,200 by five seconds.

"She had an incredible year," Central coach Lisa Taylor said.

Kearney and Bullough, who like to train together, have similar race philosophies – run as hard as you can for as long as you can. It's paid off for Bullough, who used her track speed down the stretch to catch Way in one of the more memorable MHSAA Finals finishes.

"It was crazy," Bullough said. "I didn't think I could catch her, but then at the last second somehow I did. I was in shock. It went by so fast I didn't really feel like it happened."

It did, much to the delight of her coach, Ben LaBelle.

"I think I've worn that video clip out," he said.

Bullough's been involved in a number of close races. Not all have gone her way. She finished second by less than a second to Manistee's Annie Fuller in the 1,600 and 800 at the LP Division 3 Track and Field Finals in June. Facing that type of competition has sharpened her edge.

"Running is a totally mental sport, and I feel I have a stronger mental personality now," she said.

Bullough also has a calming disposition that enables her to stay focused and level-headed. No moment seems too big.

"She is as she presents herself," LaBelle said. "She's a happy person. She's well balanced. She can make herself go when she needs to and she doesn't get flustered."

Bullough is hoping to run in the 17:40s this season, although she realizes it will be a process over the next several weeks. She trained hard – running and lifting – over the summer. She worked out with teammates, Kearney and Way, who will be her future teammate at Michigan State and is a good friend. No shortcuts were taken.

“(Bullough’s) a gifted athlete," LaBelle said. "That's the foundation. But she also works extremely hard to get the best from her God-given gifts."

This could be a special year for the Gladiators. "I expect to contend for the state championship," LaBelle said.

The 17-year-old Bullough, of course, will lead the way. Can she repeat?

"That would be so cool to win again," she said. 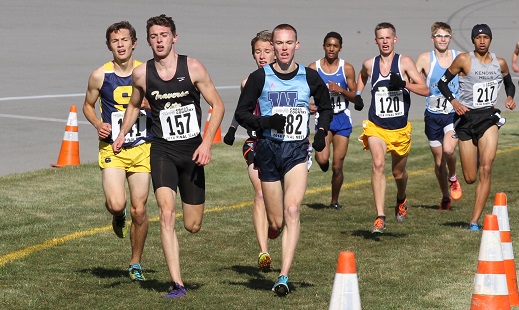 Berry has a Finals championship among his goals, too. In fact, he's hoping to win every race he enters this season.

"That's a big thing to say, but I really don't plan on not winning," he said. "I'm going to hold myself to that, and I'm going to work as hard as I can to make that happen."

"That's a great goal," he said. "My wish for him is that he does the best he can do every time out. Winning every race, that's the way he operates."

Berry has been on a steady climb since he dedicated himself to running in the ninth grade. In cross country, over the last three years at the MHSAA Finals, he's posted the top freshman, sophomore and junior times in Division 1.

"That's tough to do," Lober said. "What this year holds, well, that's why we're having the season, to find out."

Berry – who plans to take official visits to the University of Michigan, Michigan State and Penn State this fall – seems primed for a banner year. He runs almost every day, averaging about 60 miles a week. Sunday is the exception. He bikes on that day.

"We have all these great biking paths here, so I try to get 30 to 40 miles in to take some of the pressure off my legs and keep my aerobic system up," he said.

His goal is to drop his time under 15 minutes. Berry ran a 14:16.56 to win the Cherry Festival 5K in July, although the course was actually short of that distance.

"It was still a full three miles," Berry said. "And that (time) was with a week off before the race. If I continue training hard, and stay healthy, I can do it (under 15). I don't have a doubt in my mind.”

Like Bullough, Berry is a hard worker with a strong mental makeup and good foot speed. Lober expects him to run under 50 seconds in the 400 next spring.

Berry, 17, is well aware that, on paper, he is the state's top returnee this season. He acknowledged that adds pressure, but at the same time helps motivate him.

And he's not overlooking the competition.

"I'm not taking anything for granted," he said. "I know there are some really good runners in this state."

Lober feels fortunate that he might have the best.

"You're not going to see an Anthony Berry come along very often," he said. "If you haven't seen him run, you better go watch him. He's the real deal. I feel lucky to be part of it."

The 15-year-old was a star in middle school, and she continued to excel in her first year on varsity.

"She loves to run," Taylor said. "I've always felt the kids who are really going to go far, beyond the high school level, always have that as their starting point."

Kearney became the first Central girl to run under 18 minutes at the MHSAA Finals. Her teammate, Ashley Ko, was right behind (17:57.7 and 17:58.5, respectively) as the Trojans placed second as a team. Kearney and Ko, who is now running at Northwestern University, worked together throughout the season, pushing each other, to reach their goal of running under 18.

Kearney is looking to improve upon that this season. She’s shooting for a top-two finish and a time in the 17:30s. But that's not her first goal.

"I really want our team to make the podium again at states," she said. “I think that would be super cool.”

Kearney ran two half marathons in July as part of her off-season training.

“I upped my mileage, and I'm a lot more confident in my running,” she said.

Kearney followed a half-marathon training schedule for most of her summer workouts. That was fine with Taylor.

“I'm not the kind of coach who says you have to follow my schedule to be successful,” Taylor said. “For me, it’s always been, ‘What can I do to keep you happy as a runner in our program?’

“I think every coach knows deep in their heart that when you have a runner like Sielle, it's not your training that makes them fast. Any coach who is being honest knows these type of kids have something special about them that really has nothing to do with you. Our job as coaches for kids like Sielle is to keep them happy and recognize how much fun the whole team part can be and the friendships that can develop. Sielle’s really good at that.”

For her part, Kearney tries to keep running in perspective. When Taylor recently handed out questionnaires to her team, she asked them what their dream goal will be in three to six years.

Kearney responded: “My biggest goal is to continue to love running. It would be cool to run in college, and maybe even in some big races, but the ultimate goal in my running career is to never stop loving it, even if that means giving up competitive running.”

“That’s what every really great runner can say about their feelings for the sport – that the love was always there, the desire, the motivation,” Taylor said. “That was part of why they were successful because they have those roots for the love of the way it feels, mentally and physically.”

“It's going to be pretty cool to watch these runners,” Lober said. “We're lucky. People have to go watch these kids run to understand what we've got.”

PHOTOS: (Top) Holly Bullough (1740) pulls away at the end of last season's LP Division 3 Final at Michigan International Speedway. (Middle) Anthony Berry (157) leads a pack around the final turn of the LP Division 1 boys race. (Below) Sielle Kearney (1172) runs toward a fifth-place finish at her first MHSAA Final. (Photos by RunMichigan.com.)