BROOKLYN – Kayla Windemuller was exhausted from a championship effort.

The Holland Christian junior didn’t have much left in her after winning the MHSAA Division 2 individual championship Saturday with a time of 18:06.4.

A race volunteer helped a weary Windemuller make her way down the long finish area at Michigan International Speedway. As they reached a two-foot cement barrier that runners’ stepped over on their way out of the chute, Windemuller sat there and tried to get her bearings while the volunteer got her a cup of water.

When her mother came along and put her arm around her, it seemed to dawn on Windemuller what had just taken place.

“I won,” Windemuller said with a smile, a reassuring sign of life.

Windemuller put the hammer down in the final mile to win by 24.5 seconds over St. Joseph junior Anna Fischer. Reigning champion Erika Freyhof, a senior from Hamilton, was third in 18:32.4.

Windemuller was second by 21.8 seconds to Freyhof, a long-time rival, in last year’s MHSAA Final. Windemuller and Freyhof compete in the same conference and the same Regional.

“I think there were two races this year that I haven’t raced her,” Windemuller said. “It’s fun. I like racing against her. We have a really good friendship, and we push each other to do our best.

“I really love racing against her. It’s our very last cross country race together, so it’s bittersweet.” 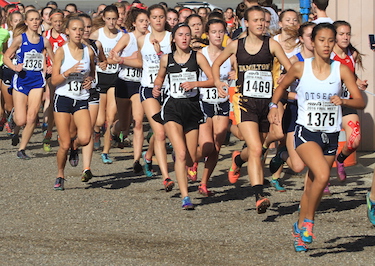 It was during track and field that Windemuller began to close the gap between her and Freyhof. Windemuller swept the 1,600 and 3,200 meters in the MHSAA Division 2 meet during the spring.

“During track season, we were really close in all our races, so that built my confidence for this year,” Windemuller said.

In the team competition, Otsego shattered the Division 2 record by scoring 48 points to repeat as champion. The previous mark of 79 points was set by East Grand Rapids in 2003.

It was East Grand Rapids that was a distant second with 187 points, finishing as runner-up for the second straight year. Grand Rapids Christian was third with 208 points, extending its record streak of top-five finishes to 15.

Otsego put its five scoring runners in the top 14 among team competitors.

Aalberts, Hirzel and Drobny all have run in the MHSAA Finals for teams that placed third in 2013, second in 2014 and first the last two years.