HARRIS TOWNSHIP — The Menominee girls had been the frontrunners in the Great Northern Conference throughout this golf season.

They came in first again Thursday, retaining their Upper Peninsula Division 1 title with 373 strokes at Sage Run Golf Course, followed by Ishpeming Westwood with 424 and Marquette with 436.

“We have five real good athletes,” said Menominee coach Tony Hofer, who also coached the Maroons to the 2019 championship before last season was canceled due to COVID-19. “They had to figure out the short game at first. Although when you play every day for a month, you get better. The girls were a little worried going into this course, but they made the course very playable for the kids. This is a very nice course.”

Menominee senior Josie Hofer was medalist at 81, including 39 on the back nine on a partly sunny and warm day.

“I started off with an eight and six on the front nine,” said Hofer, who will be playing at Wisconsin-Oshkosh next season. “I just needed to get the ball on the green. My chipping hadn’t been that good, although it went pretty well today. My driver was a little off, but it’s different every day. That was my best nine-hole score in an 18-hole tournament. 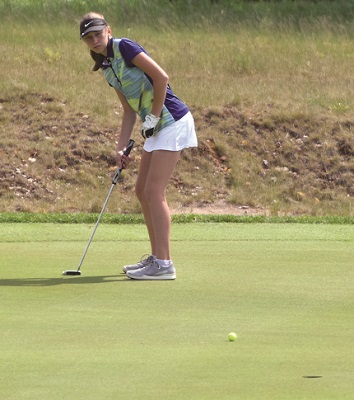 “I’ll probably do some weight training and work on my game this summer. I really need to work on my short game.”

Negaunee sophomore Rachel Niskanen was runner-up at 84, including 38 on the back nine.

“I think my short game was probably a little better on the back nine,” said Niskanen, who birdied on No. 15 and 16. “The front nine may have been a little more challenging, although we weren’t warmed up yet. Once I started to par some holes, I became more confident. There were a lot of hills out there, and I got a little tired going up the hills. It was a nice course, though. I’m happy with my score. I’ve been working on my game a lot. Everything is going okay, but there’s room for improvement all the way around.”

“I just played it safe everywhere,” said Derusha. “I had to stay focused and not worry about other scores. My short game went real well, and my driver was pretty good, too.

“I think this is even a little better than winning two years ago. I’m happy for the seniors. It was nice to send them off with a U.P. Championship.”

Nolde, also a Wisconsin-Oshkosh tennis recruit, said her game wasn’t quite as good as usual, but she was happy to place fourth and go out on a U.P. championship team.

“I had a couple rough holes,” she added. “It was a tough course. The fairways were long. Although, my drives and putting were pretty good. It feels really good to win as a team and end my career as U.P. champions.”