Fortunately for the girls golf team from Grand Rapids Forest Hills Northern, it hasn’t made all that many this season.

The Huskies secured their first MHSAA championship since 1982 with a two-day total of 656, turning in a round of 329 on Saturday after entering the second round of the Lower Peninsula Division 2 Final with a seven-stroke lead. Bloomfield Hills Marian shot up from fifth to runner-up with 668 strokes.

Led by freshman Lilia Henkel’s 79-77-156 (eighth individually), FHN was able to finish strong with big contributions from the entire lineup. Junior Kay Zubkus carded 160 (78-82) for a tie for 10th place individually. Maddie Goodrich, a senior captain, fired an 81 on Saturday for a total of 168, and senior captain Chloe Johnson recorded rounds of 83 and 89 for a 172. Anna Fay shot 93 on Friday and Gabby Mas finished with a 95 on Saturday.

“We had a seven-shot lead going into today and felt very good,” Forest Hills Northern coach Kent Graves said. “That was a good cushion to have. It allowed us to play maybe a little more conservative than we would have if we were behind. Our girls responded. We shot two shots higher than we did yesterday, but it was enough to win and we feel really good about it.

A key for the Huskies, who finished sixth in Division 2 in 2016, was managing Bedford Valley’s slew of elevated greens, which were even more difficult at times as the leaves fell relentlessly.

Goodrich and Johnson, who played their final prep rounds, did just that. Goodrich pointed to the 391-yard par-5 fifth hole, where she birdied, as the catalyst to her round. She also birdied the par-4 15th hole as part of a strong finish.

“It was like no time passed while I was playing,” Goodrich said of the surreal feeling of going out as a Finals champion. “It just flew by. (Friday) I had a few rough holes and some first-day nerves. Coming into today, I knew I could shoot the score I wanted to if I just went one shot at a time.”

Added Johnson: “It feels amazing. I don’t think I’ve ever been so happy. I’ve always dreamed of being a state champion, and I never thought I was going to be able to do it. But here we are.” 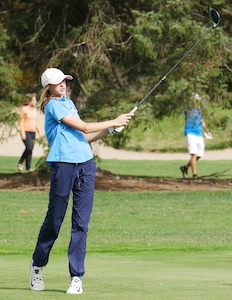 Individually, it was Marian freshman Shannon Kennedy who devoured the 5,422-yard layout with a 2-under par 70 in the final round for a medalist total of 146. In her championship debut, Kennedy penciled in five birdies — three in her final eight holes — to finish ahead of Midland Dow senior Alexis Carras (74-75-149). Kennedy posted a round of 76 on Friday.

With 10 years of hockey experience, Kennedy’s trademark early on in her career is her length off the tee. Saturday she was able to convert distance to scoring with her effort on the greens.

“Pressure doesn’t seem to bother her,” Marian co-coach Cathie Fritz said of Kennedy. “The hardest thing was it was a slow round, so there was a lot of standing around before they’d tee off. We had her walk to a tree or walk somewhere else so she wasn’t just standing there staring at it. She just has a great attitude, and she’s truly one of the most coachable kids I’ve ever been around. She made the clutch putts that she needed to make, whether they were for birdie or for par.”

Marian shot 16 strokes better Saturday. Senior Alexandra Robb posted an 81 for a three-stroke improvement from Round 1, freshman Lauren Sass’ 85 was seven shots better than Friday’s round, sophomore Marlo Hudson was steady with 90-90 and junior Kate Zink trimmed nine shots from her first-round score to finish with a 90 on Saturday.

“For being as young as Shannon and Lauren are, it’s really fun to see them so calm under pressure,” Fritz said.

Kennedy birdied two of her first seven holes with three pars in the mix. Two of those birdies were on par-5s, and she also managed to birdie the tricky par-3 12th hole.

“It was a crazy day,” she said. “It was long, it was hot and it was tiring. I knew I had to pull it together and fire a good number on the back nine, and I did.”

PHOTOS: (Top) Forest Hills Northern’s Chloe Johnson rolls a putt during Saturday’s second round. (Middle) Marian’s Shannon Kennedy watches one of her drives on the way to claiming the medalist honor. (Photos by Wes Morgan.)