Incredible. Improbable? Coach Julie Prout calls it “magical,” and that might work best of all.

Before the fall of 2015, there was no Shepherd girls golf program. That August, it held its first practices ever, and two people in the entire program had some golf knowledge coming in. Prout herself was not one of them – she wasn’t a big golfer at the time, although now she loves the sport.

How can she not with all her team has enjoyed so quickly? As this September came to a close, Shepherd won its second straight Tri-Valley Conference West championship – earning the first MHSAA/Applebee’s “Team of the Month” award for the 2017-18 school year. The Bluejays added their first Regional title Wednesday and are ranked No. 9 in today’s Lower Peninsula Division 4 coaches association poll.

“I have an extremely hard-working bunch of girls. They play all summer and then they are in a simulator in the winter; they have their hands on golf clubs a lot,” Prout said. “Other than that, I would tell you they have great chemistry. They’re hard-working, they’re great students, really good people, and they are enjoying golf.”

Shepherd shot an aggregate team score of 929 over five TVC West jamborees this fall, averaging out to 186 strokes per nine holes and 46.5 per player whose scored counted toward the total. The Bluejays shot a 410 in Wednesday’s rainy gloom at home course Maple Creek to finish 16 strokes ahead of reigning Regional champ Frankenmuth and move on to next weekend’s Lower Peninsula Division 4 Finals.

Three Bluejays, all juniors, placed among the top 10 at the Regional, which was astounding considering again that those golfers were incoming freshman the first year of the program. In fact, junior Maggie Bryant was the catalyst in the team’s formation, making initial contact with the athletic department about starting a team. Prout, now in her 30th year teaching in the district, also coaches softball and coached cheerleading a while ago, and took on the golf program in large part because no one else showed interest.

Shepherd had nine golfers the first year and 10 last season. The Bluejays then graduated four off the team that not only won that first league title but made the MHSAA Finals and finished 15th in LP Division 4 last fall. 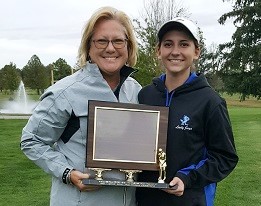 Four players are shooting in the low to mid-40s on average; Yates shot an 18-hole 96 to take third at the Regional and Raymond was fourth at 99, while Bryant was ninth at 105.

Again, only two players had notable knowledge of the game before two years ago. So on the first day in program history, Prout started with fundamentals. She took some of what is taught in the local youth program, and a graduate of Shepherd’s boys golf team came in and taught basics. Prout, with the help of her coaching colleagues in the TVC, learned and taught the many rules of the game, and Shepherd’s boys program welcomed the girls into one big family. (The boys team won the Class C-D championship all the way back in 1970 and also has had recent success winning its Regional this past spring.)

“I put a lot of people in front of them that were knowledgeable,” Prout said. “We had a lot of help along the way from past coaches who were on the staff years ago. I’ve taken them to different courses to play, but also to be instructed by the youth programs. I’ve learned just as much as my girls.”

And now the Bluejays are passing it forward. Clare has a first-year team this fall, and Prout said see the Pioneers this fall was like looking in a mirror.

Shepherd offered its knowledge and anything else, paying it forward just as so many did in getting Prout’s program off and golfing.

Her athletes are a little tired now, she admits, from playing a lot of golf to this point in the season. But the Bluejays surely have two more great rounds left in them this fall with another incredible opportunity to accomplish success seemingly years ahead of schedule.

“Years and years and years ago, one of my players, Morgan Yates, her mother played with the boys on the boys golf team, and I coached her in a different sport,” Prout said. “Now her daughter, they’re building something here. These girls are the foundation of what’s to come in the future, and I tell them every day how special it is – and it really is.”