Senior Margo Brown, however, represented her school admirably by earning medalist honors with an 83 at the Escanaba Country Club.

“It’s a beautiful day,” said Brown, who will play basketball at Ferris State University next winter. “It was a little windy, but it wasn’t that big a thing. I like this course. It’s pretty open and it’s in pretty good shape. I think the rain we got last (Wednesday) night helped a little.”

This marked the third consecutive year Brown was crowned individual champion. She also won Division 3 in 2013 and captured the Division 2 title a year ago.

Bark River-Harris retained its team title with 439 strokes. Crystal Falls Forest Park went home with the runner-up trophy for the second straight year with 457, and third-place Engadine had 464 on this sunny and mild day.

“That’s a very tough task, especially in D-3 with so many good teams,” said BR-H coach Scott Farnsworth. “All of the girls improved through the season. They put a lot of time and effort into their game. I don’t put any pressure on the kids. I just stress working hard in practice. Many of the girls play during the summer. For the most part, they know and understand the game. They do the work. I just offer them guidance.”

“This was absolutely a solid performance by our girls,” he said. “I’m very proud of their performance today. We have one senior who has played for a year. Our junior (Annie Taylor) who placed fifth today means a lot to our team. She keeps improving every year and our two freshmen have come a long way. Both of our freshmen hadn’t played much golf before this year. We’re very pleased, especially for having only four girls. All of them did what they were supposed to do. Our (Skyline Central) conference represents itself well.” 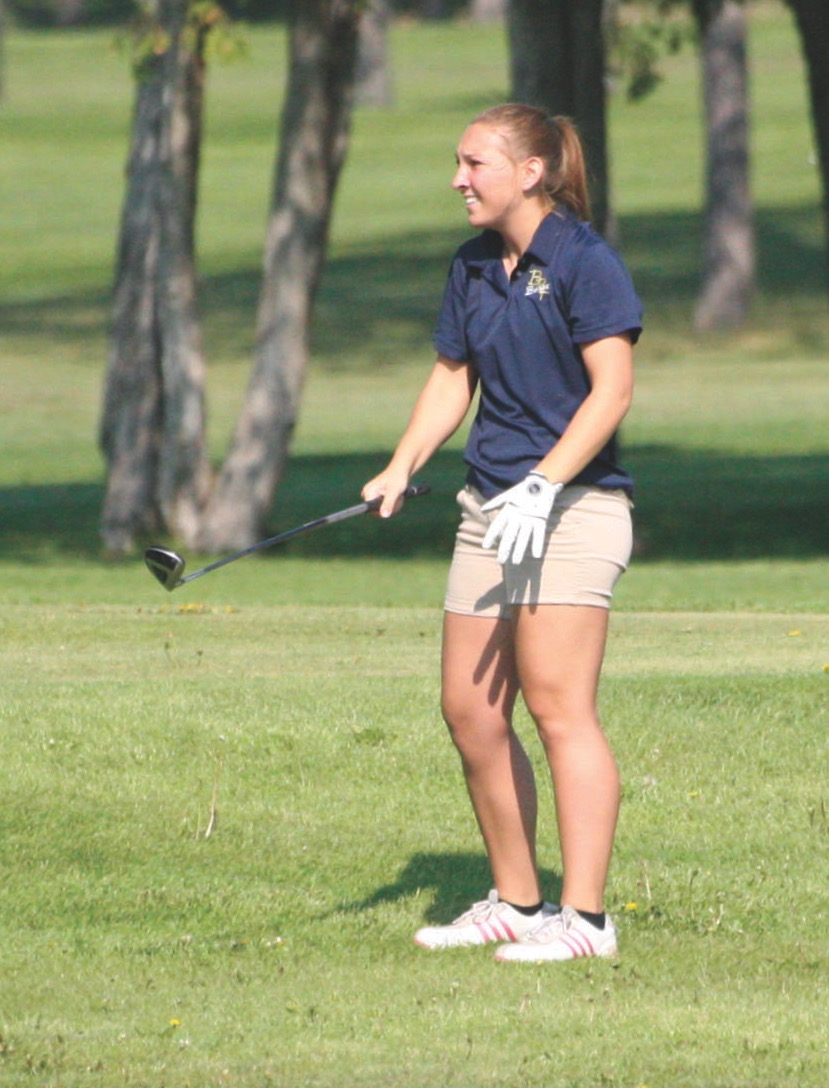 Brown stated with a double-bogey on No. 1 and finished with a 43 on the front nine. She followed with 40 on the back.

“When you have a bad hole, you’ve got to shake it off and do better on the next hole,” she said. “My irons were pretty good. My drives were decent, and I started making good putts. On the back nine I was ready to go. Number 10 was a pretty good hole. After Number 10, I knew I was going to have a pretty good back nine.”

Starnes improved by two strokes from a year ago on this course.

“The first nine holes were pretty rough, but the back nine went better,” she said. “My swing felt a lot smoother once I got into a rhythm. My second shot got better this year. I struggled with my woods last year, but I worked on that extensively and feel more comfortable with my whole game.”

“I had a lot of bad shots,” said Wilke. “It was a lot of different things at different times, although I’m pleased to come out of here as a runner-up. I think everyone was nervous today.”

PHOTOS: (Top) St. Ignace's Margo Brown watches a shot on hole No. 6 at Escanaba Country Club on Thursday. (Middle) Bark River-Harris' Hannah Starnes sizes up a shot on No. 3. (Photos by Keith Shelton.)