On Wednesday, the sophomore capped off one of her two sports by winning medalist honors at the MHSAA Upper Peninsula Division 2 Girls Golf Final.

"It was all about making smart plays," Dube said as light rain began to fall shortly after she finished. "I was able to get on (the greens) in regulation, and that helps the scores well. If you get in the fairway, that always helps."

She had two birdies, one on each side, while starting on No. 11.

"When I hit a good drive, it gives me confidence the next (shot) will be good," she said.

Dube, who was in contention throughout the handful of spring meets that were salvaged after a lengthy winter's grip forced her indoors for numerous practice sessions, said, "I didn't know what to expect (in the Finals)" because she was competing against different schools.

The only member of the girls golf team at Hancock, Dube also spends the spring playing softball for the Bulldogs. Golf is her No. 1 choice and would get the nod if there were ever a conflict between the two sports.

"We have a small (Class C) school, and spring has so many other sports. You definitely have to prioritize," she said of her busy schedule that also includes a heavy academic load. She was late for only one softball game this season.

Topping the team scoreboard, the Painesdale-Jeffers girls won their third U.P. crown, adding to titles taken in 2006 and 2007.

"It is awesome. It feels great to actually be her coach," Tyler Bailey said.

The Jets didn't realize they had beaten the only two other full teams until it was announced, Bailey noting he kept that news quiet.

When that news struck them, he said, "Their faces all lit up.” 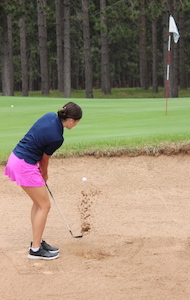 The 481 was his team’s best score of this abbreviated spring. "I knew they had the potential to pull it out,” Bailey added. “Our expectations were they wanted to win.”

Dube’s father is a teacher at Hancock High School and sets up a golf simulator in his classroom for his daughter's practice when snow typically covers the Copper Country.

"You don't have to be outside to practice," she said with a grin.

"The kids have put in their time up here. A lot of them play hockey, so their coordination stays sharp."

Sintkowski hopes the interest in the girls junior program begins to carry into the high school ranks. He said about 20 girls played golf at five Copper Country schools this spring. But Houghton, a perennial power, had 11 of the 20. He said starting a co-op program among other schools might provide a way to get more female participation.

"You still have to practice that skill. In golf, you are playing the course, not the other player."

"She hits the ball well, she is athletic but she needs a bit of focus. She had a good score today, but it could have been four-five strokes better," he said. "She is learning, but she has to get a little more polish. She has all the tools to play golf after high school."

PHOTOS: Sophomore Payton Dube of Hancock uses her rangefinder to get the yardage to the pin on the 13th hole at Norway’s Oak Crest Golf Course on Wednesday at the Upper Peninsula Division 2 Girls Golf Finals. With her is coach Paul Sintkowski. The system worked perfectly as her approach shot struck the flag. (Middle) Donae Anderson of Norway blasts out of a bunker by the 15th green. She tied for second, shooting 103. (Photos by Dennis Grall.)